Illustrations, identification numbers, parts lists, and other information on Ford's front and rear axles and differentials.
<
>
If you've come here to find the part numbers for your front axle's parts then you've come to the right place.  However, it isn't a perfectly straight forward venture.  Here's how to do it:

Tag Info: If you know the information off the tag on the front differential then use this process:No Tag: If you don't have the tag or can't read it then use this process: As an example, let's assume that you have a 1980 F150 with a 3.00 axle ratio, manual locking hubs, and do not have limited slip, which is the first application in the chart.  Then your # is 30.3A and you'll click on the Parts List tab, then the List 30.3 tab, and then the 30.3 A-M tab since yours is an "A".
<
> 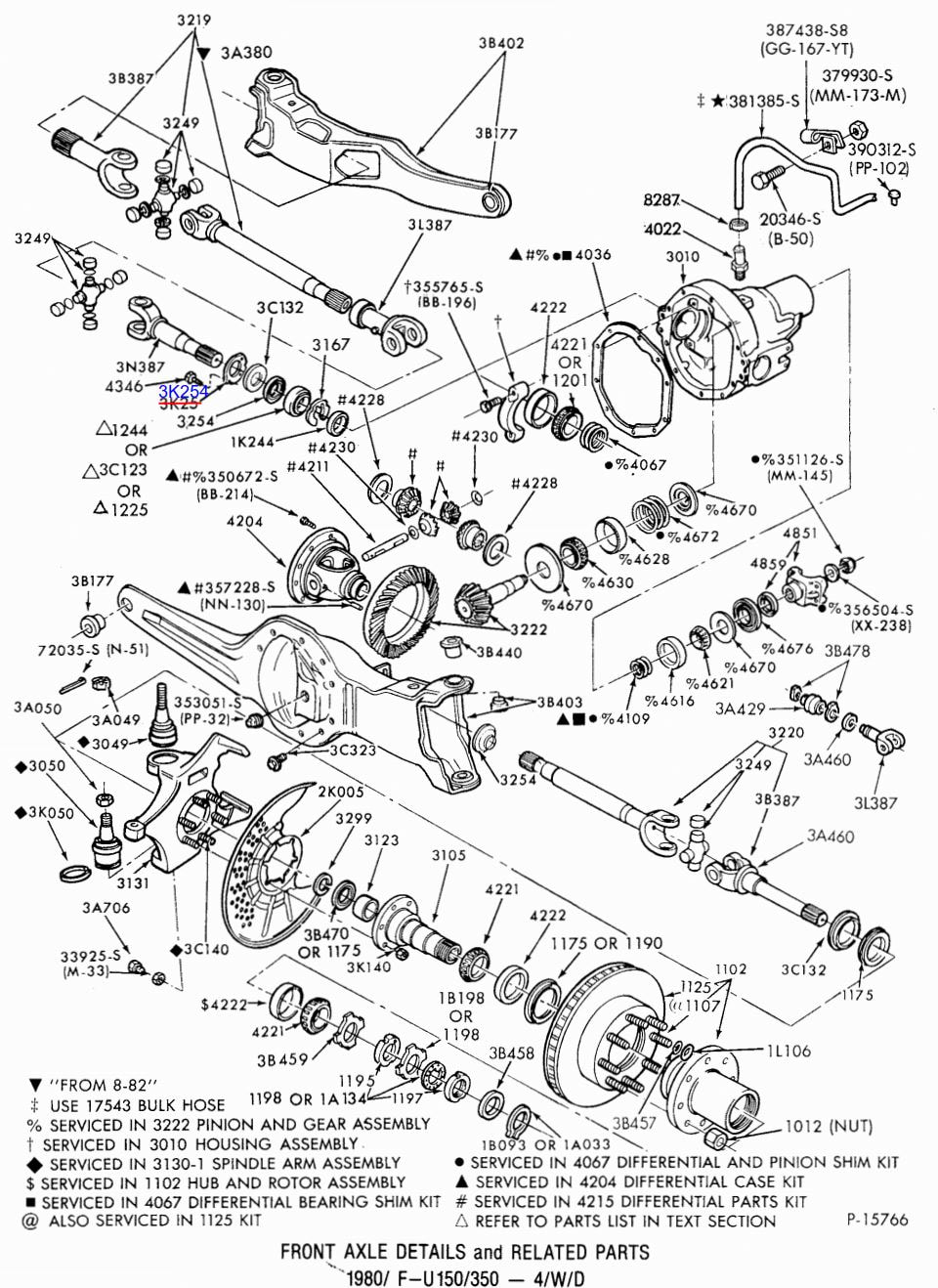 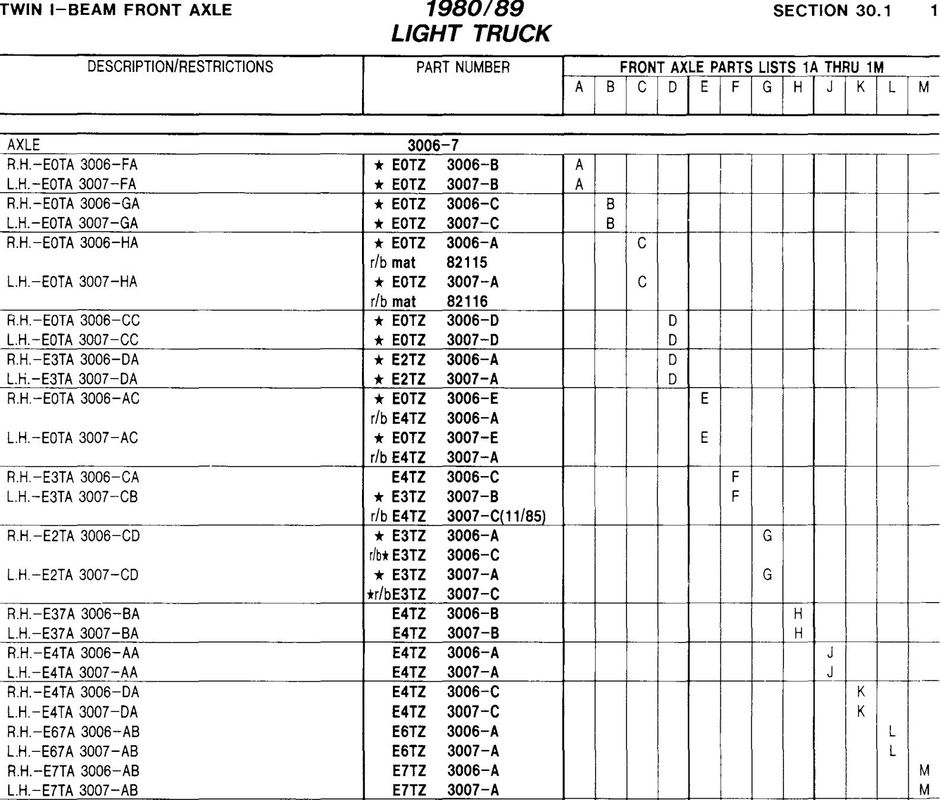 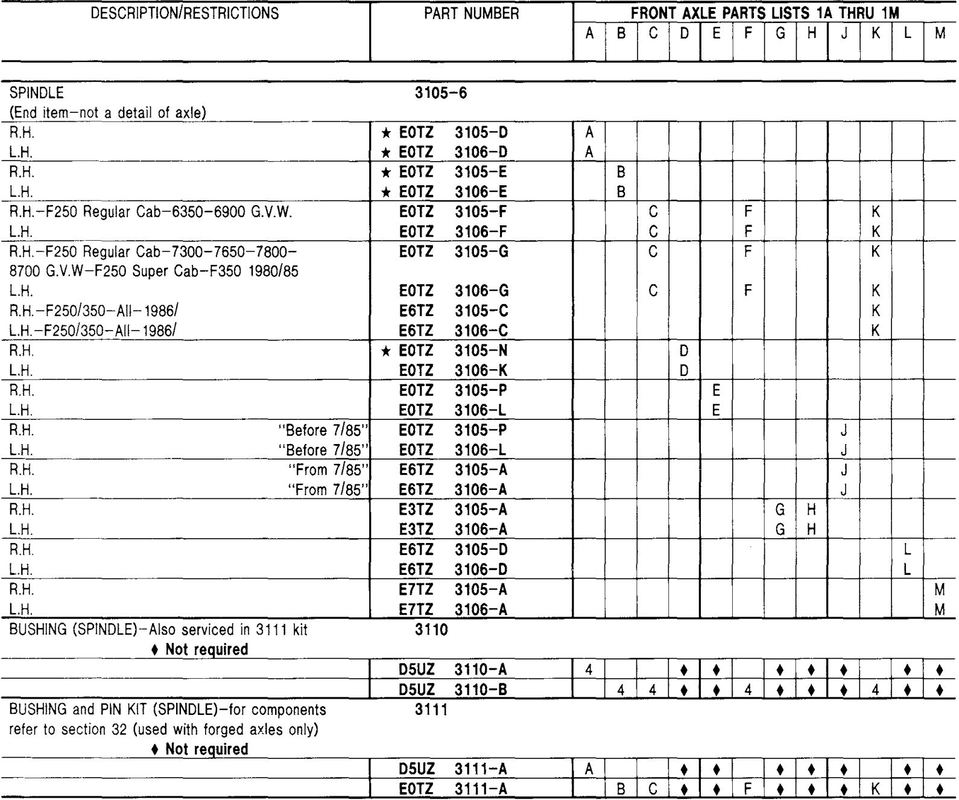 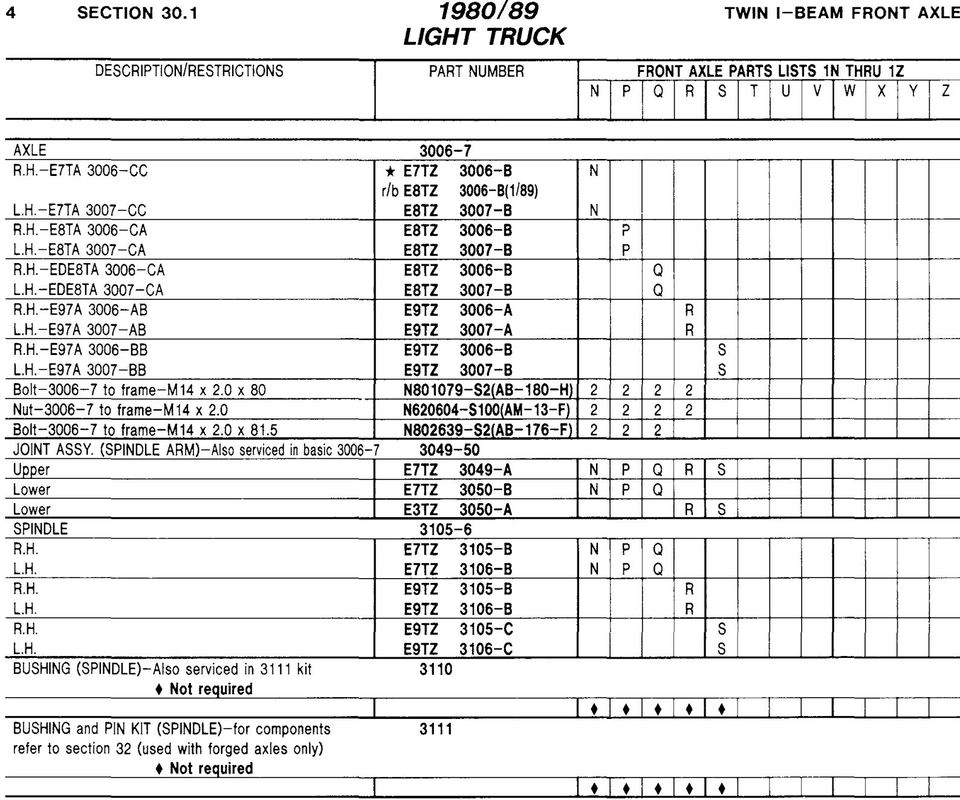 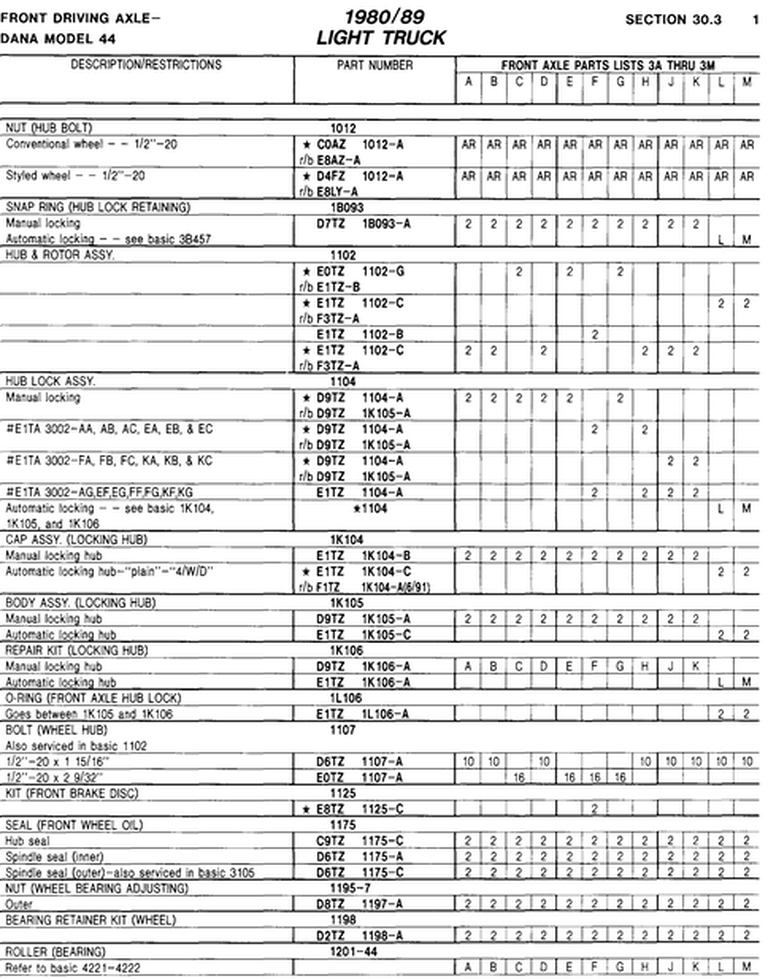 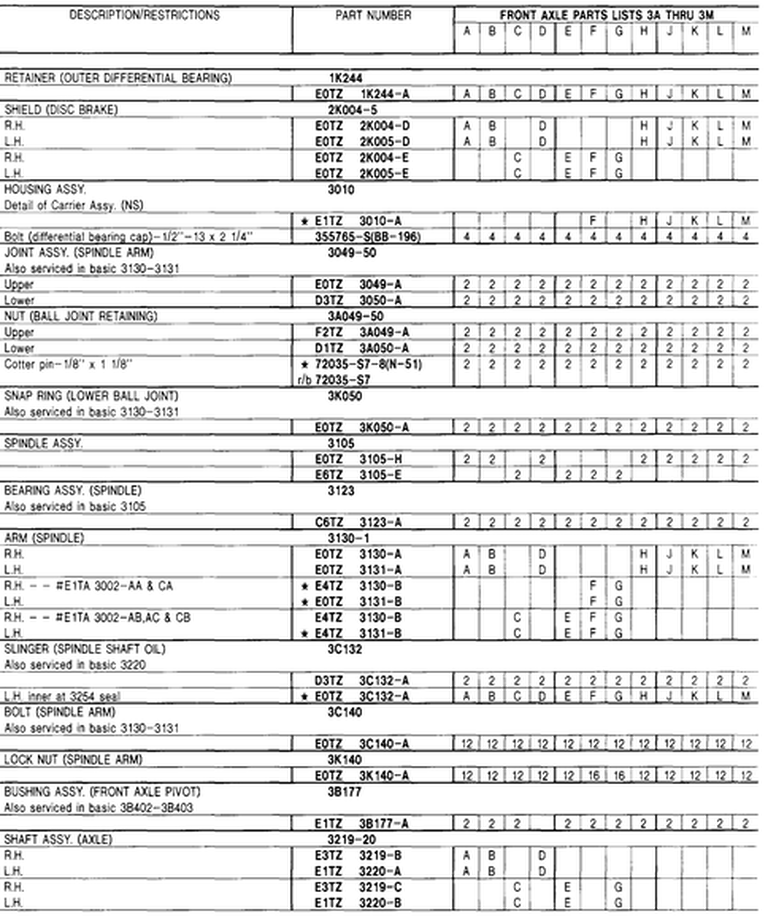 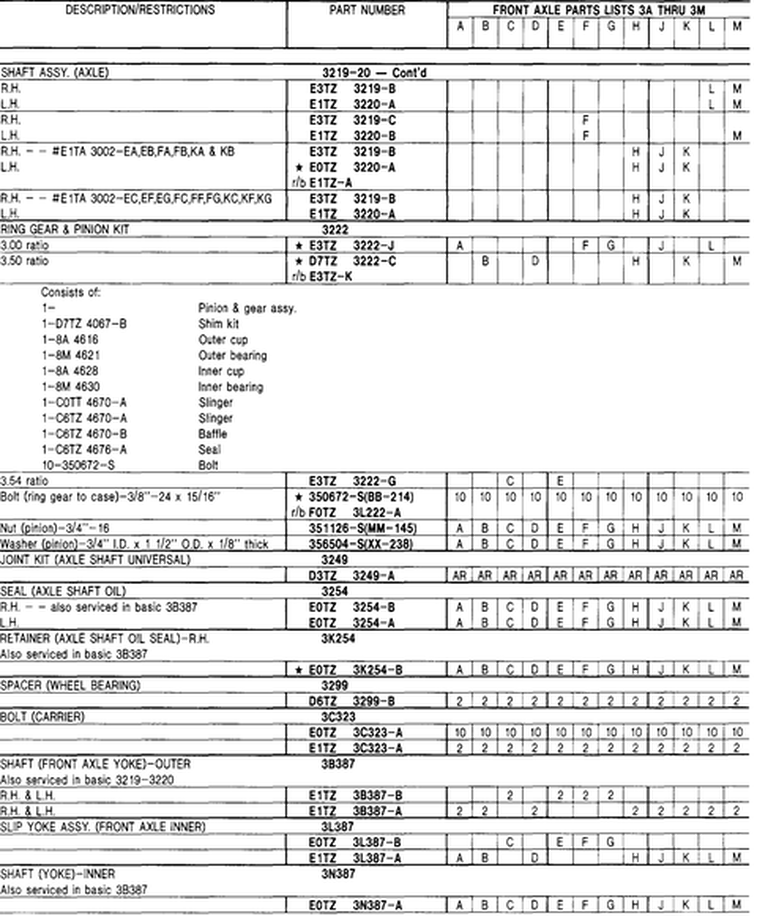 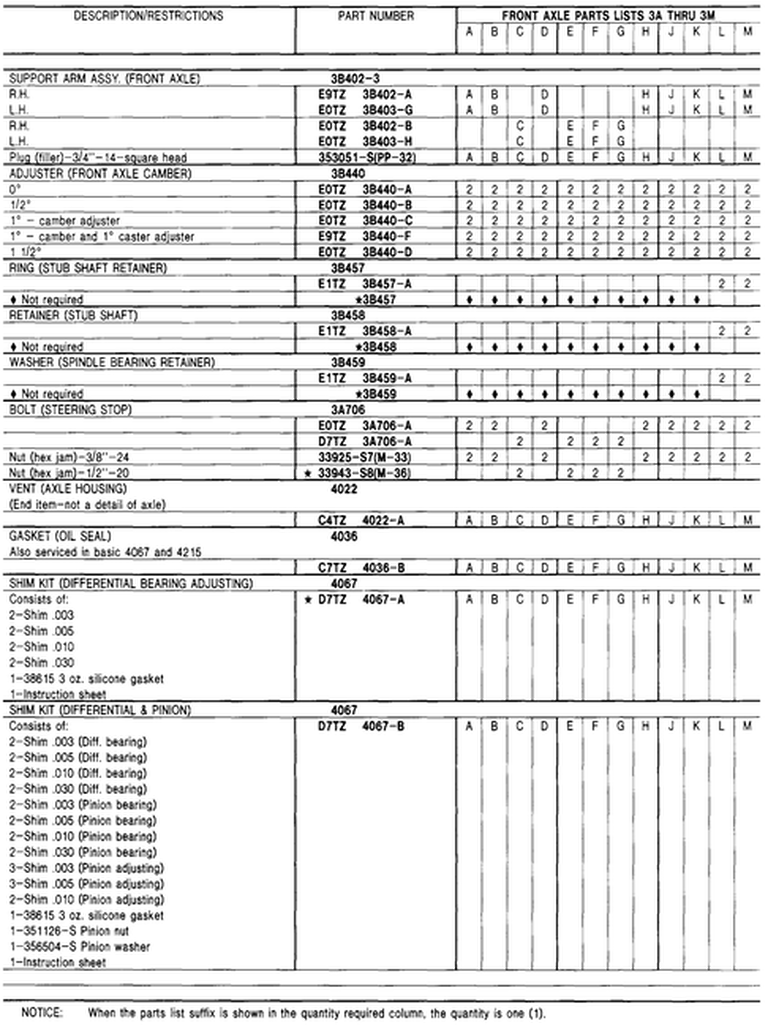 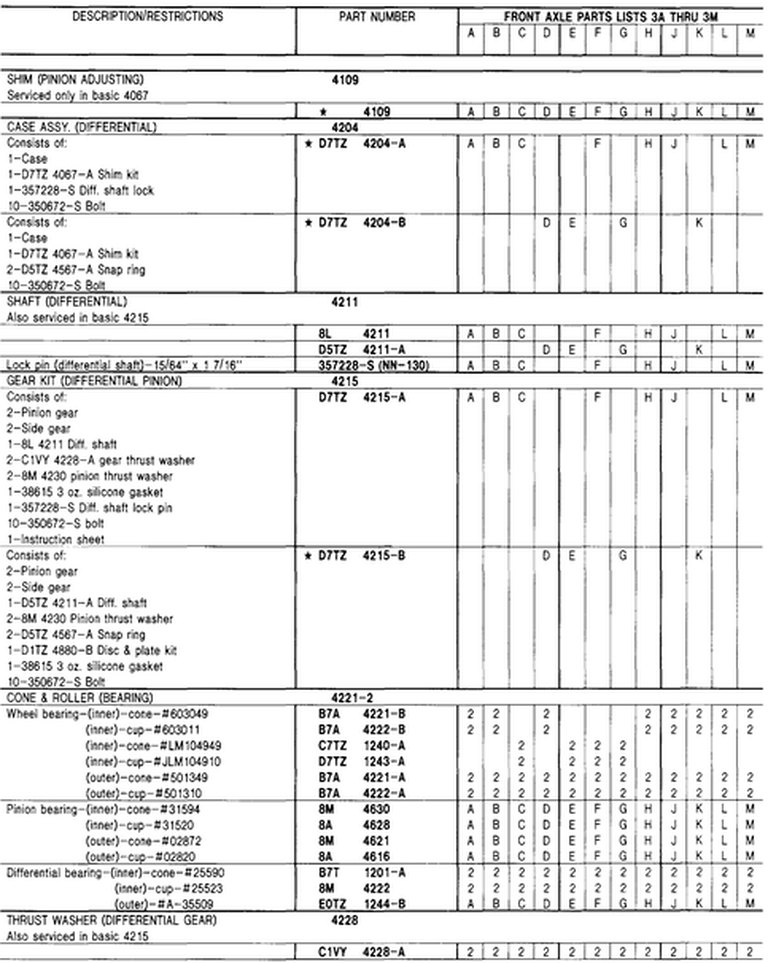 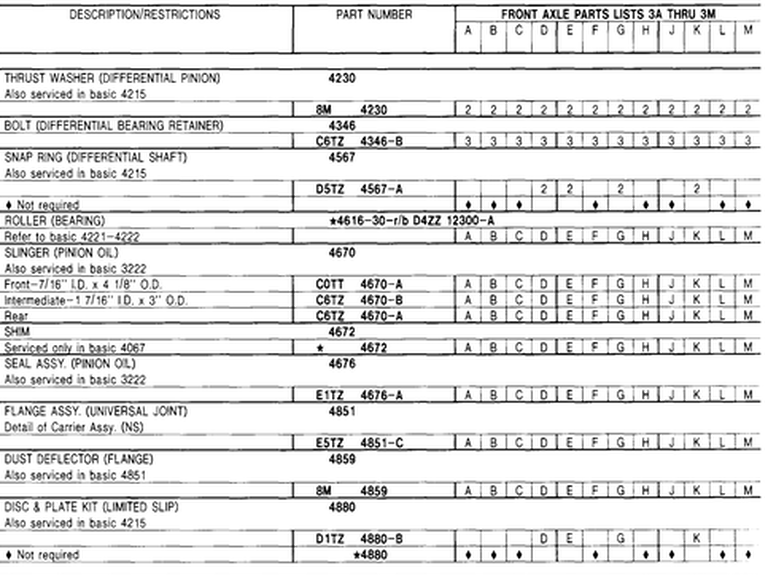 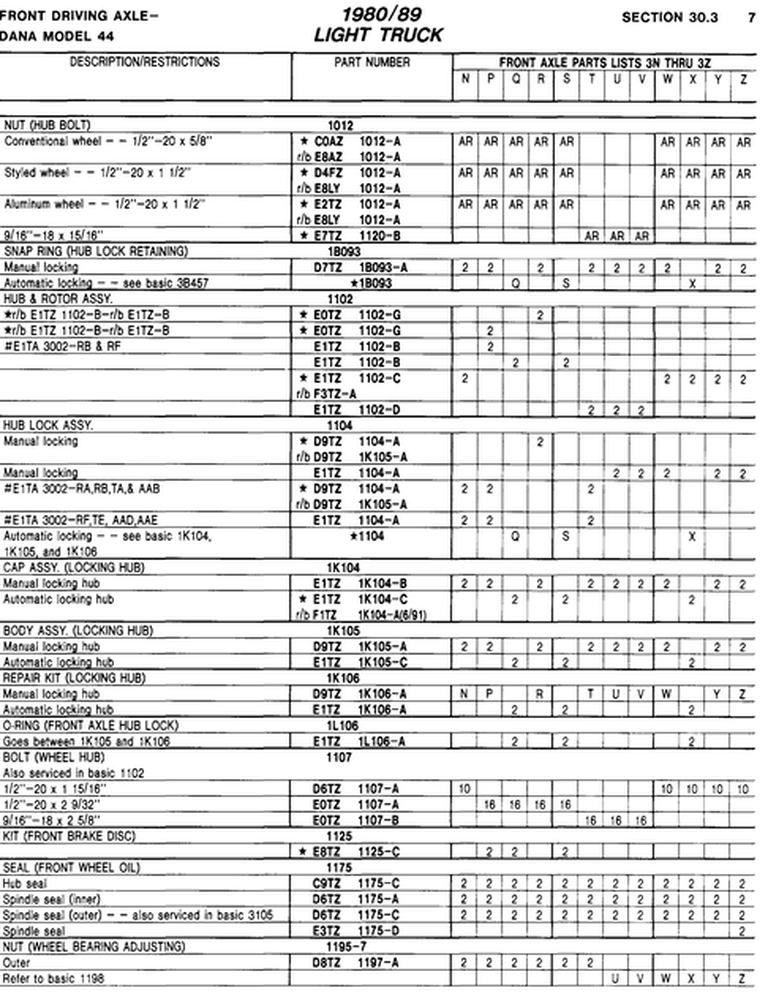 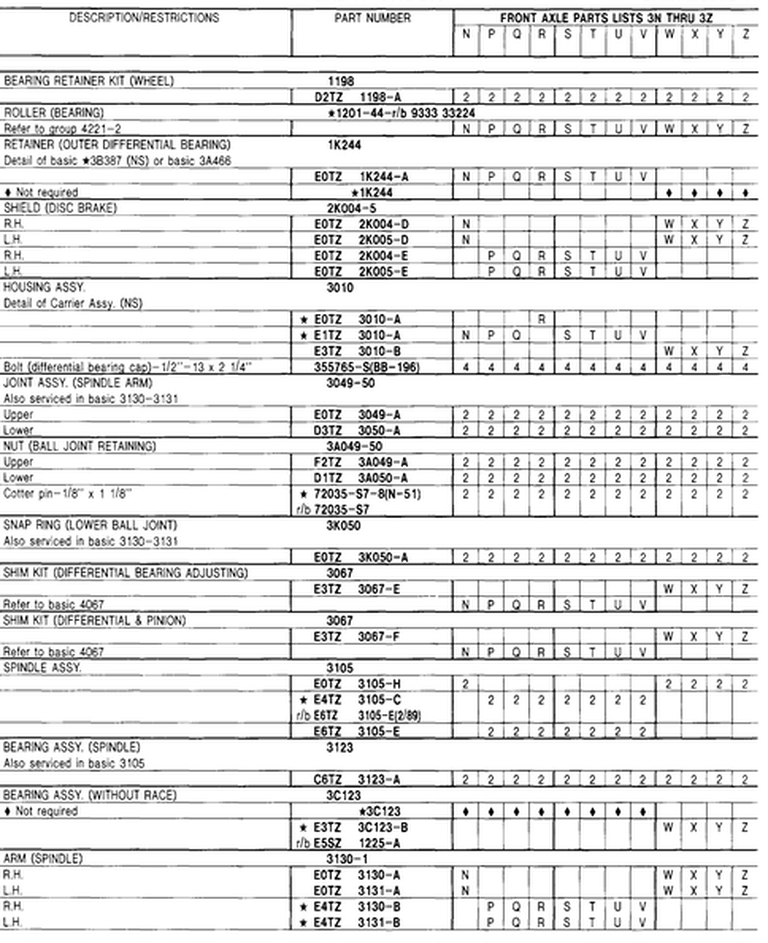 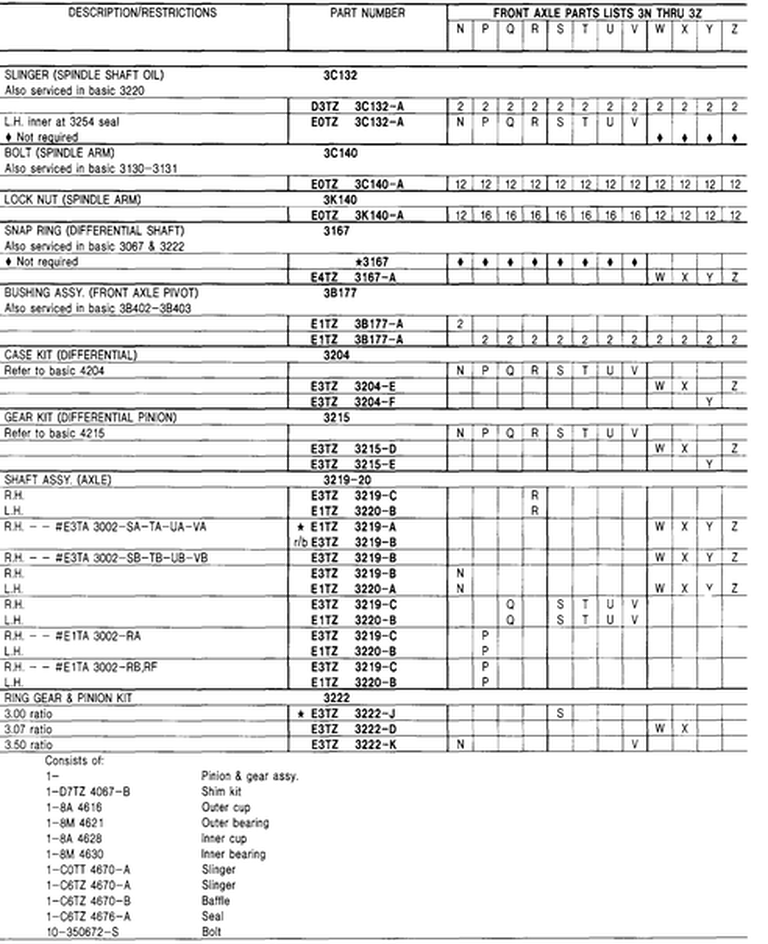 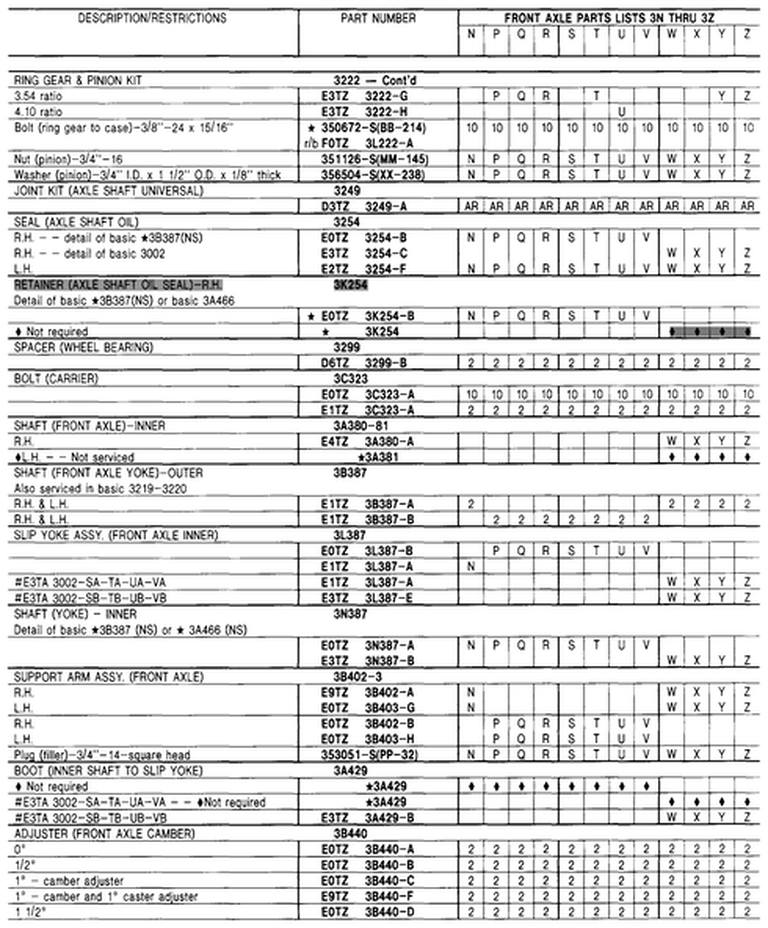 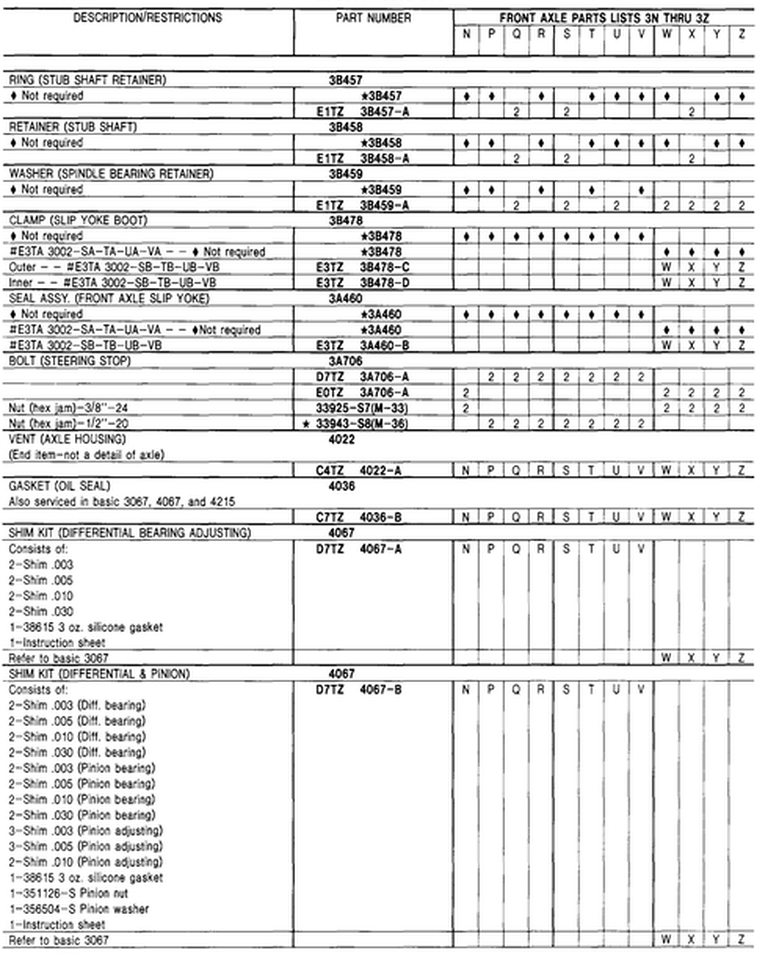 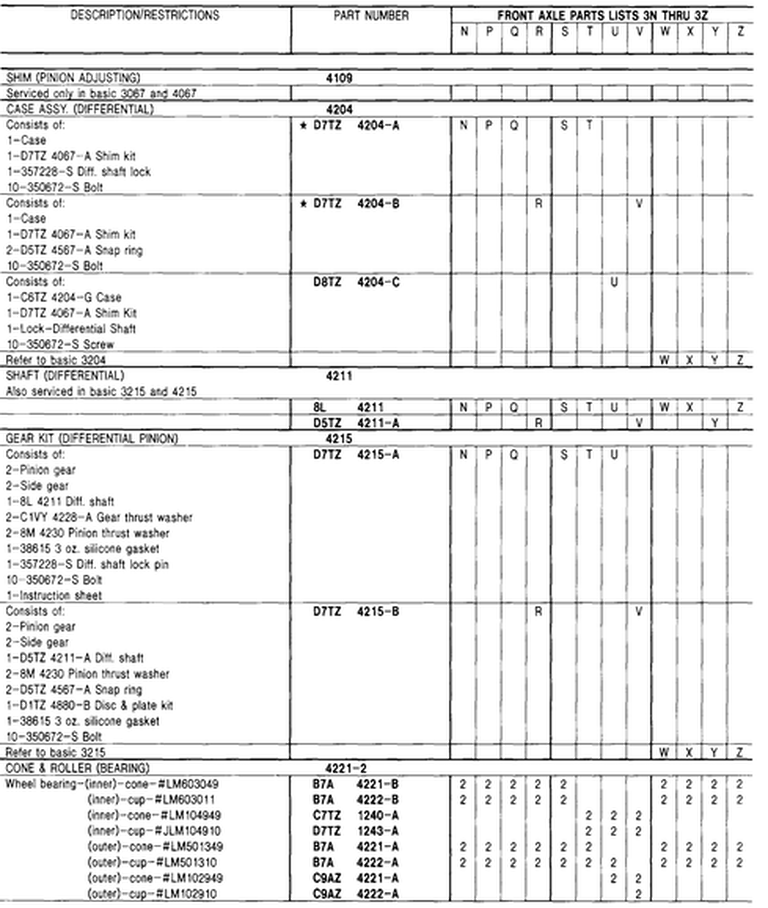 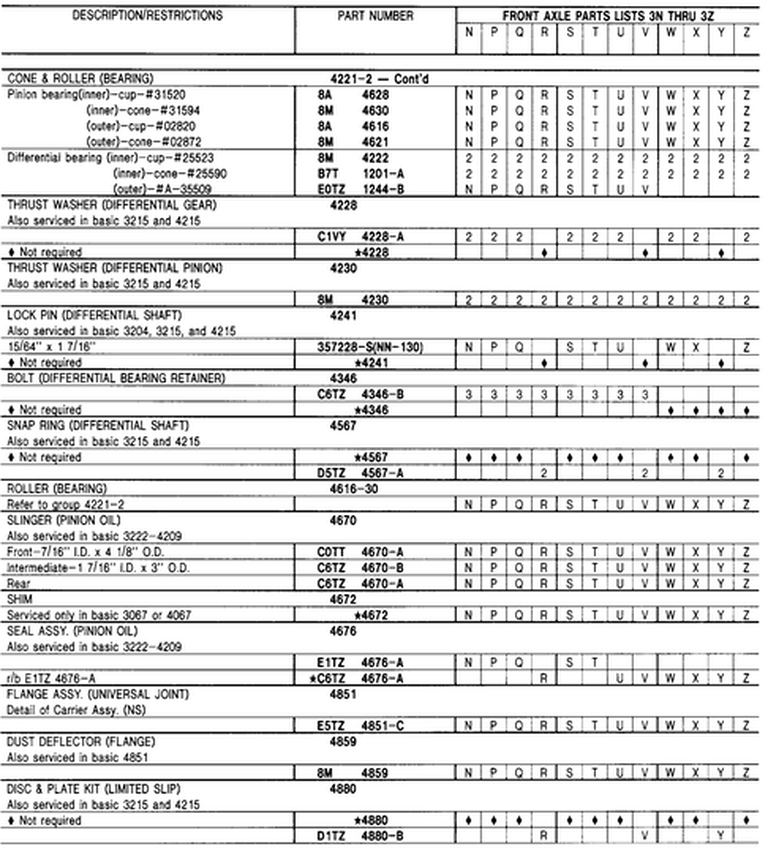 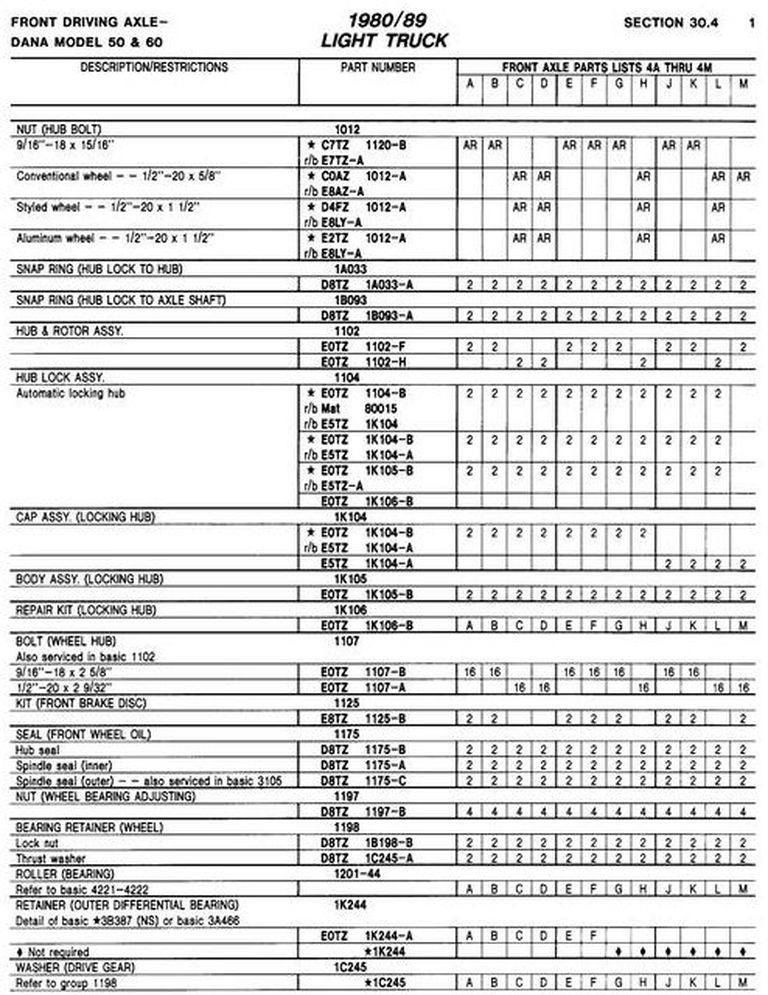 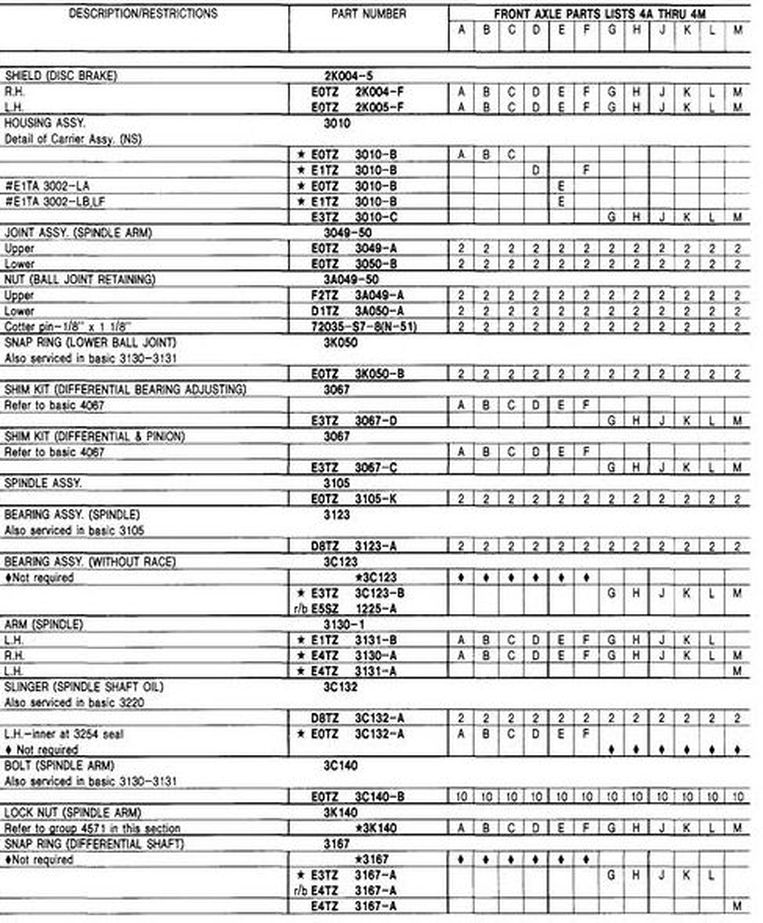 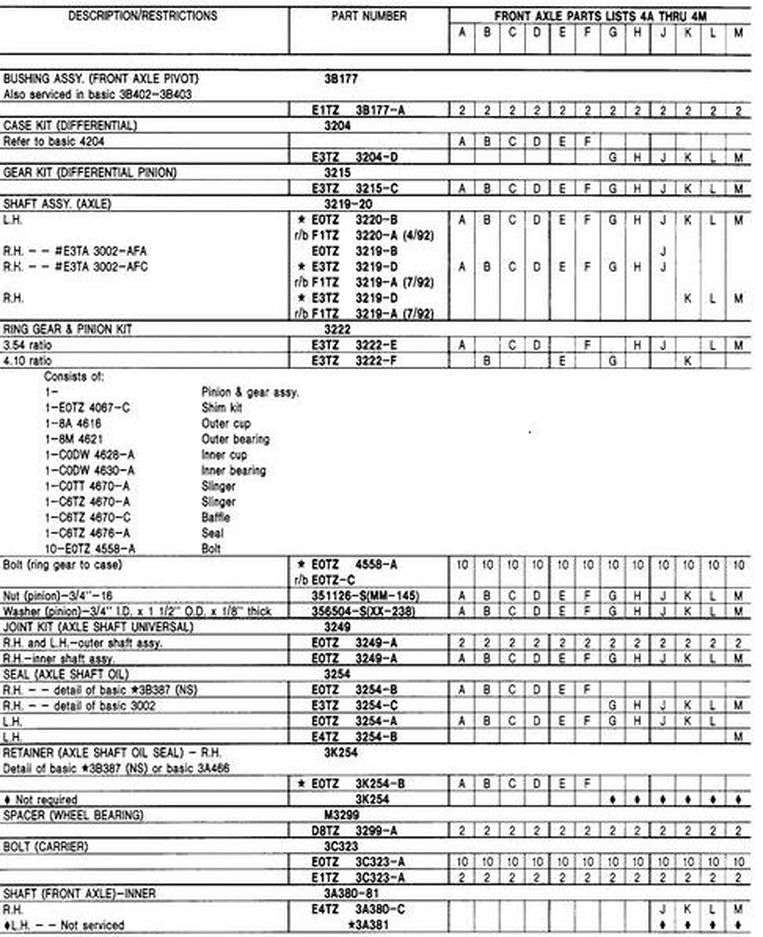 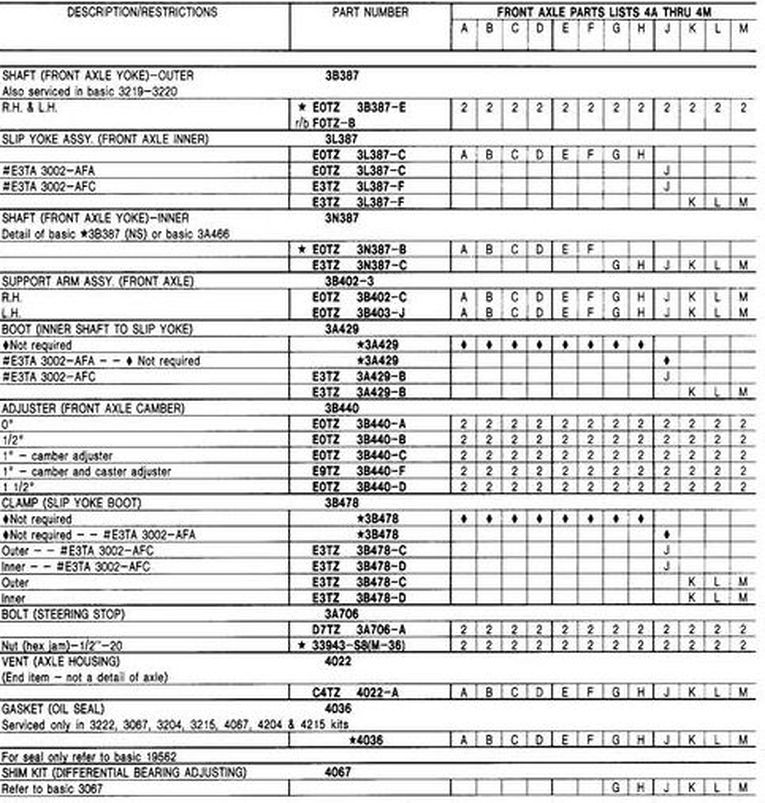 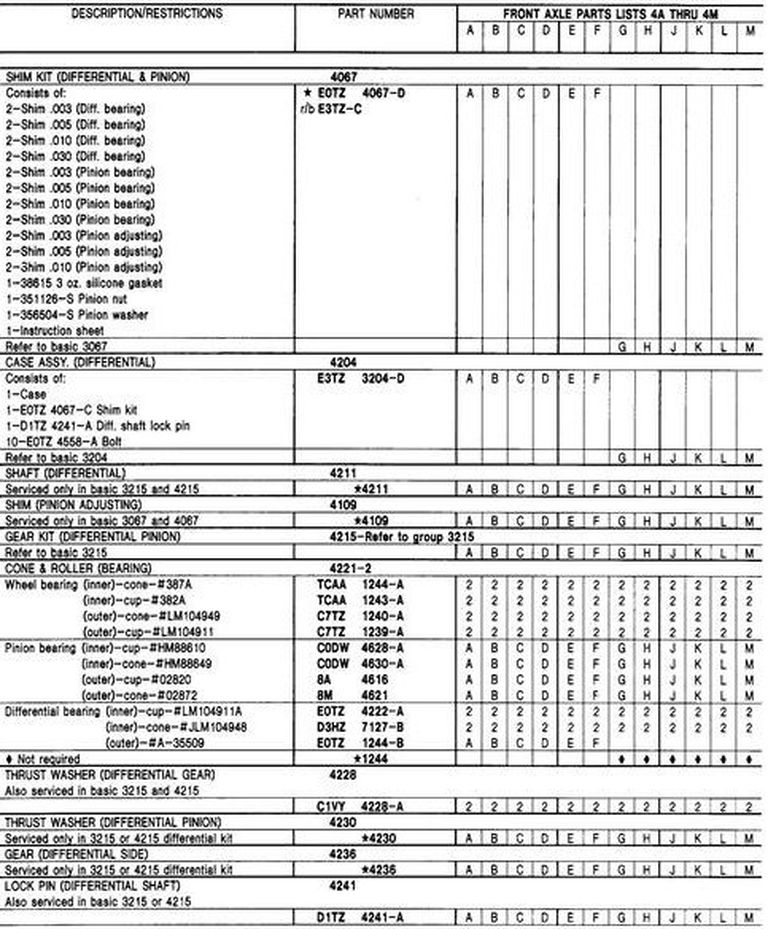 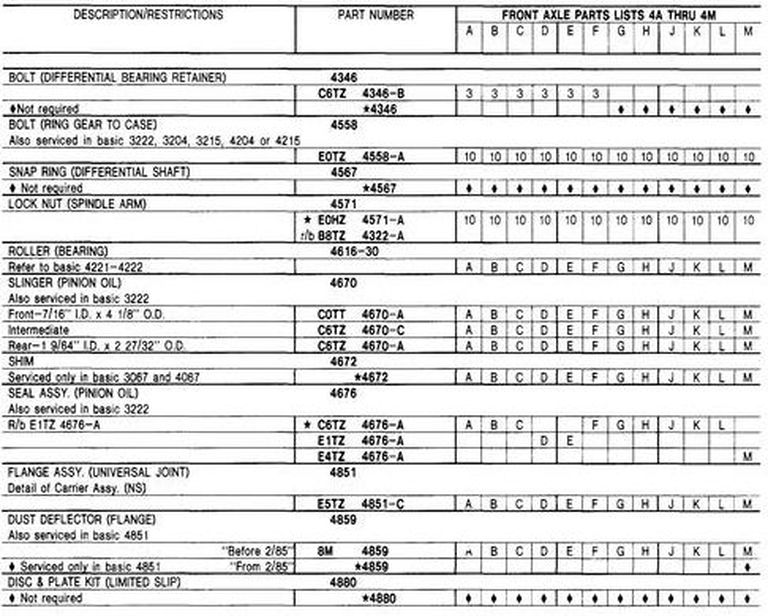 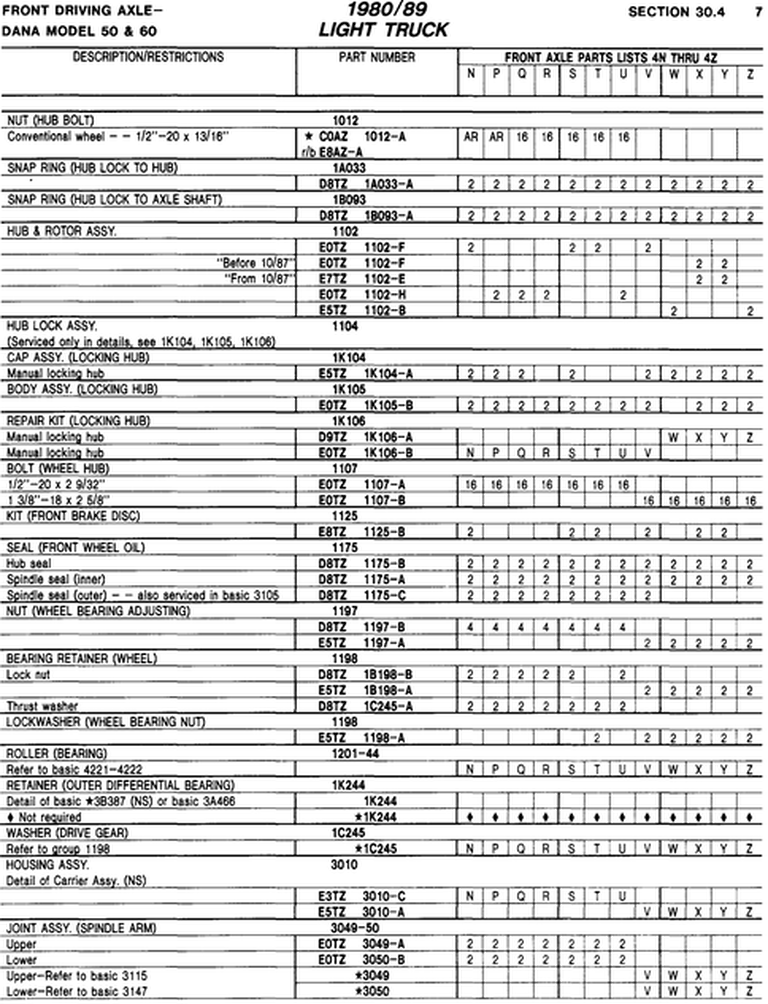 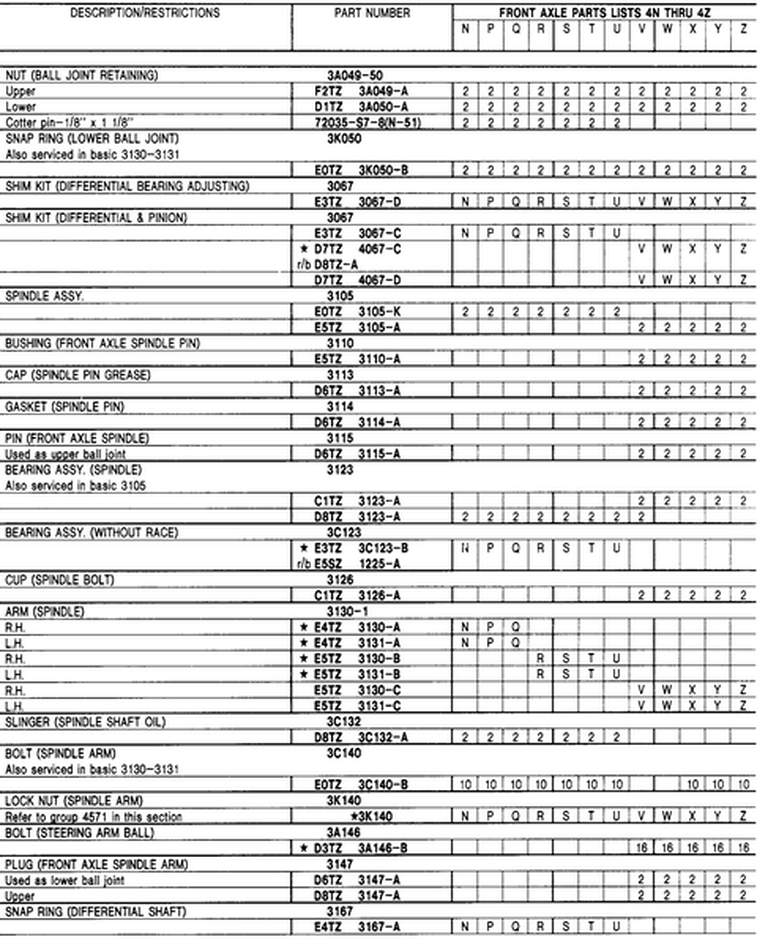 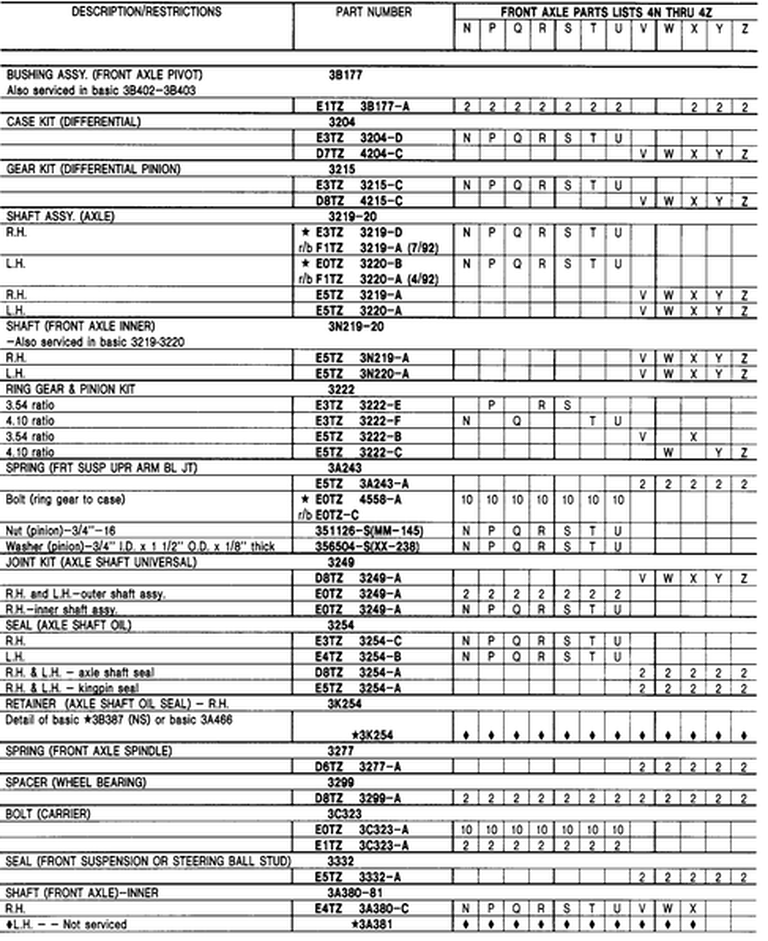 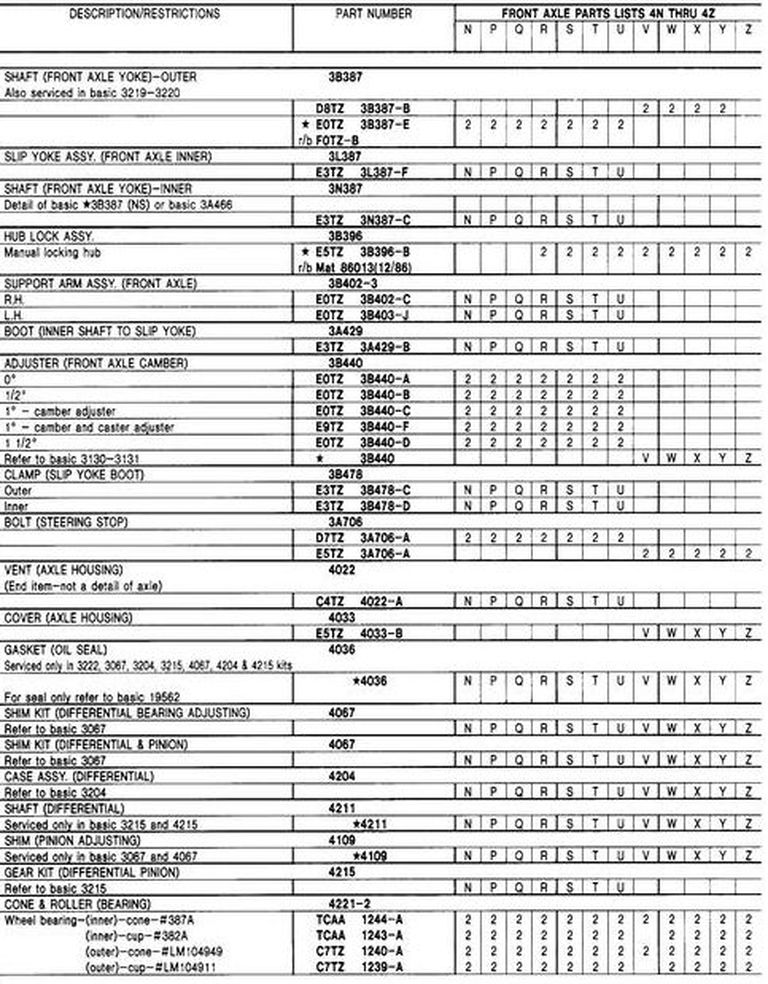 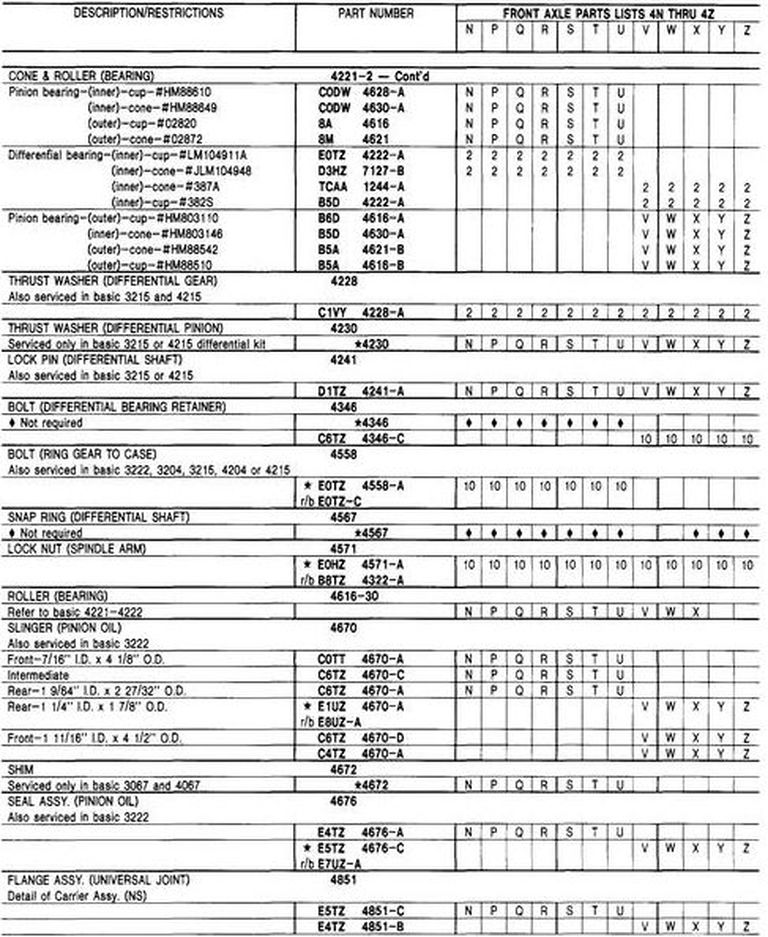 As for the changes, one that can be ascertained from the outside is in the way the right "stub shaft" is retained, and there were two methods used.  Those two are shown in the illustration below, with part 3K254 being the retaining plate and 3167 being the snap ring.  (By the way, the catalog is wrong as the retainer plate is actually 3K254 not 3K25, as shown in the pics below.) 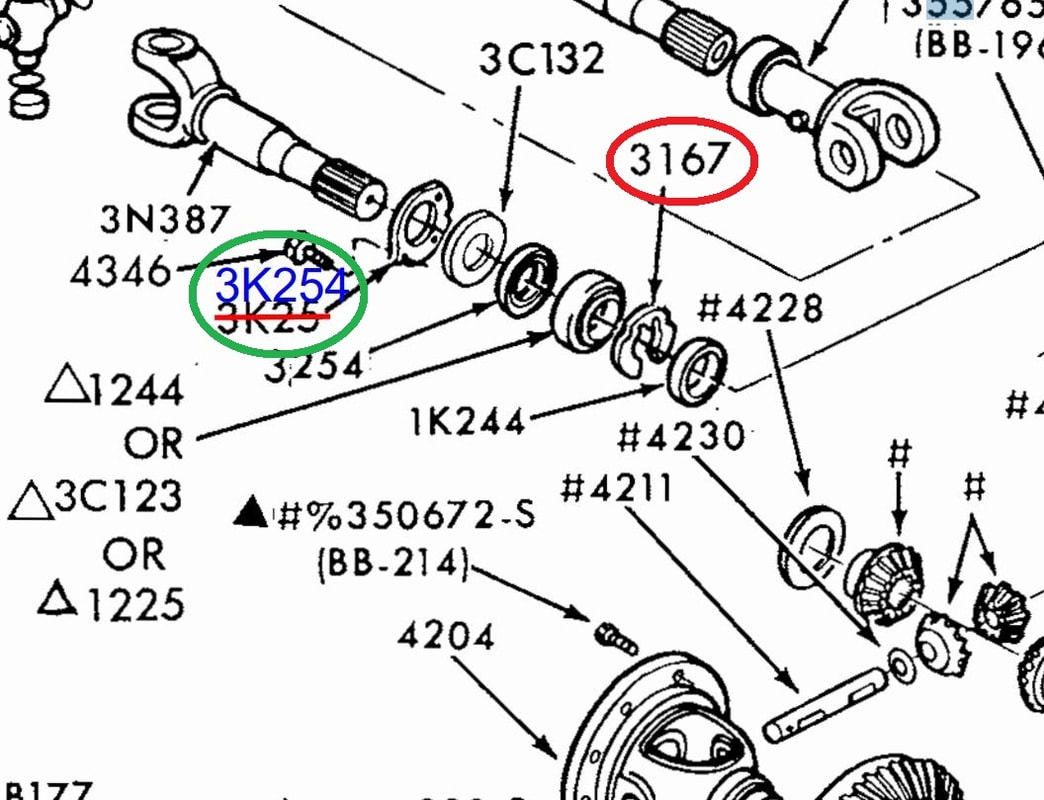 The early D44's, model years 1980 - 82, used the retainer plate held with three bolts to the outside of the case, and they used a ring (1K244) to retain the bearing.  The later D44's, apparently from model year 1983, used the snap ring on the inside end of the stub shaft, but didn't use either retainer.  What difference does that make?  On the early D44's you can pull the stub shaft out of the diff by pulling the three bolts on the retaining plate.  However, in order to get the bearing off the shaft you'll have to drill/cut the retaining ring.  On the other hand, to remove the stub shaft on the later D44's you'll have to pull the differential off of the axle housing since you'll have to pull the snap ring.  However, once the snap ring is pulled you can remove the bearing w/o cutting or drilling a retaining ring.

​To explain how I've come to that conclusion I first have to explain how Ford identified the axles used.  They were given a combined numeric and alphabetic description, with the D44's in 1980 starting with "30.3A", then after some change was made they used "30.3B", which is what Dad's truck has, then on to "30.3Z".  When the next change was made it went to "30.3AA", and so on.

In the first 12 iterations of the D44, meaning 30.3A through 30.3M, there was no entry in the parts list for the snap ring, #3167.  In other words, it was not only not used but it hadn't been thought of yet.  But, by the time they got to 30.3W they started using the snap ring and discontinued using both the external retaining plate as well as the internal bearing retaining ring.  I've illustrated that by combining bits of the parts list, below, which shows axles 30.3N through V using the two retainers and not the snap ring, and axles 30.3W through Z not using the retainers but using the snap ring.  So, the transition was between 30.3V and 30.3W.

Now the question becomes what trucks used 30.3N through V parts lists and which used 30.3W through Z.  And for that the two pics below give the answers - click them to make them larger.  In the first of those (right) you can see that 30.3N was used in 1981 & 82 as part of the snow plow package.  And, you can see that 30.3W through Z were used in 1983 and '84 F150's.  And in the pic on the far right you can see that 30.3 P through V were used in 1981 & '82 F250's.  So, the change-over appears to have been between model years 1982 & 1983, with '82 and earlier trucks using the retainer plate and '83 and later trucks using the snap ring.
But, in case you are wondering how you tell the difference, here are a couple of pictures to help clear that up.  On the left are the two D44 cases, with the early case on the right showing the 3 bolt holes for the retainer plate, and the other case is a later style with no bolt holes.  And the picture on the right shows the two different stub shafts, with the one in back having a slot for the snap ring right by the guy's finger, and the shaft nearer to us showing the retaining ring.
And, here are some shots of the D44 out of Dad's truck - the tag for which shows "E0TF EF" and "610062-9", which means it uses parts list #30.3B.   The pic on the left shows the retainer plate - that has been unbolted.  The middle one shows the other end of the stub shaft, and there is no snap ring.  And the one on the right shows how I got the shaft out.  After 35 years of being mated the parts didn't want to come apart.  But, with a red-neck puller it just took a few quick "rolls" of the diff to persuade the shaft to come out - although lots of hammer work had previously failed.
<
>
<
>
This is from the 1986 factory shop manual, but by 1995 there was at least one other variation - the rounded hex nut that didn't have the washers.  To see a diagram of that as well as how to install it go to the Balljoint tab or to Torque King 4x4.
If you are just wondering what rear axle you have, the best way to find out is to decode your certification label.  But if you are looking for parts for your axle, follow along on this example:

Example:
For an example, let's look for the differential side gear for Big Blue, which is an '85 F250HD w/a 10.25" locking axle.  On the certification label I see it has a "39", and when I decode that on axle ratios page it says it is a Ford axle with a 6.25M rating.  On the Applications Listing tab, below, I see that there are two Ford axles for 1985 with that rating - a locking and a non-locking.  Big Blue has a locking axle, so it is illustration page 12 and parts list # 261.

But I don't know the main part of the part number nor exactly what Ford called it, and their terminology can be a bit unusual, so I'm going to start on the illustrations tab.  I scroll down to Page 12 and there I see the side gear and it is # 4236.  With that info I open the parts lists tab and realize that there are 48 pages of information.  So I scroll to the bottom of the web page, not the document page, and click the Full Screen icon and open it in a new tab on my browser.  Then I click Control & F at the same time and get a search function.  I type "Parts List No. 261" into the search bar and hit enter.  The computer has think about it and voila, I'm on Page 47 with the start of Parts List No. 261 highlighted. 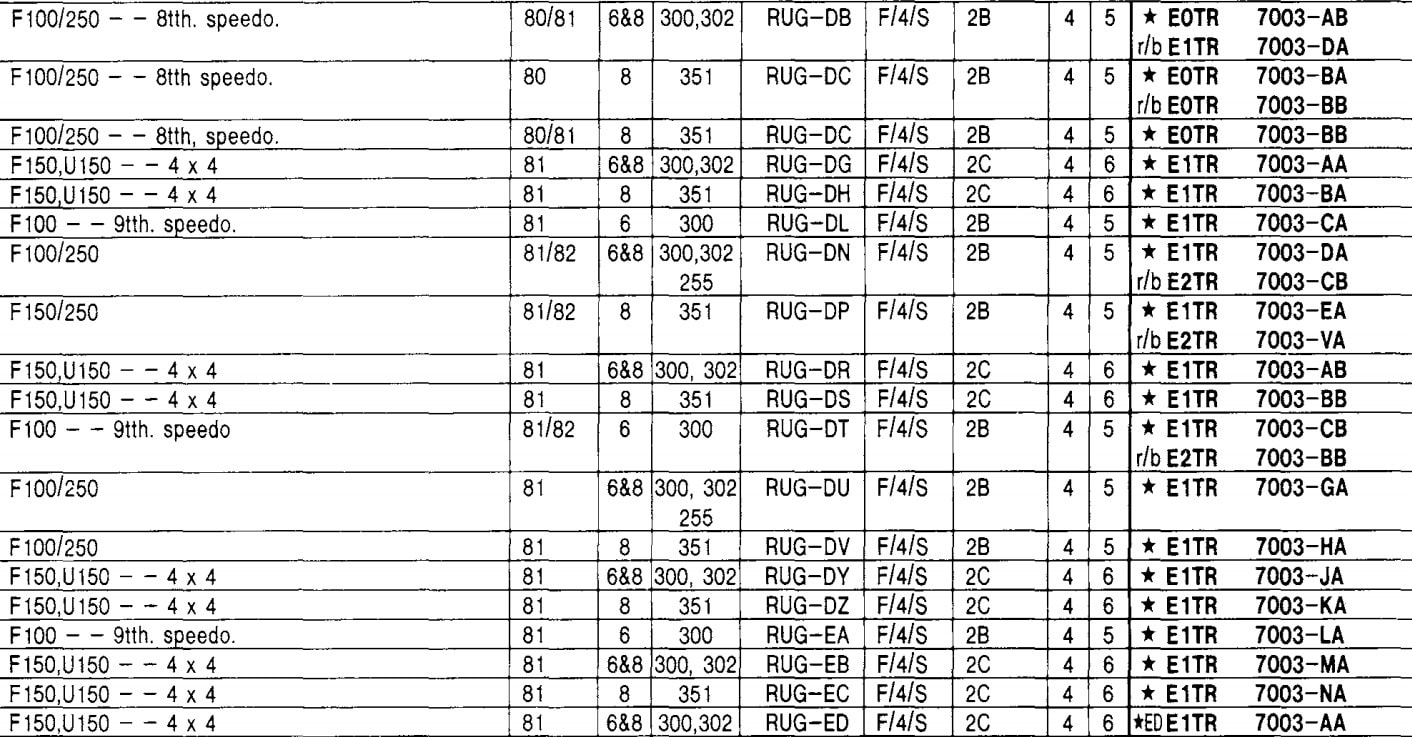