By Michael Shumack:  (Edited by Gary Lewis)
<
>
What’s the difference?
Early model trucks used a 1G (1st Generation) alternator with an external voltage regulator. This alternator put out 40 amps (single pulley) or 60-70 amps (double pulley). This system works fine for the power requirements of the early model trucks - but when additional electrical loads are added, like lights, stereo amp, winch, etc., the 1G alternator is underpowered.
In 1986 Ford started using the 2G (2nd Generation) alternator on the trucks. Ford replaced the 1G's external regulator in favor of the compact internal regulator design. However, the 2G series alternator has largely been considered the bad apple of the bunch. The flaw was in the power output plug and a weak bridge rectifier. The plastic power plugs used blade type terminals which would lose connection and occasionally melt, short, and possibly cause under-hood fires. In 1996 Ford publicly recognized the fire hazard caused by the 2G alternator and released TSB 96214.

​Fords 3G alternator was a giant leap in technology and quality. Ford trucks starting using the 3G in the 1992 F-150. The 3G was internally regulated, used two internal cooling fans, sealed bearings, and had a superior battery stud. The 3G’s were more efficient, and produced more amperage at idle than any of its predecessor.  In fact, a box stock 3G put out over 100 amps at idle as shown on our Alternator page and the DB Electrical 130A Test Results tab.

Ford 1G, 2G, & 3G alternators
​
Why Not?
If the 3G is so great, why wouldn’t I want to do this swap? There are a couple of reasons not to do this swap – or at least some additional considerations: 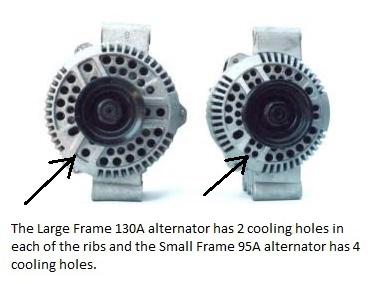 I want to do this swap, how do I start?
​​Ok, so you've decided that you are going to make the swap.  So, what do you need?  How do you start?   First you need to get a 3G alternator, although on the Wiring It tab we will discuss the necessary "charge cable" and fuse.

Alternator: There are a couple of different case sizes of 3G alternators, different mounting locations, and even different hole-to-hole dimensions: ​
​​90A or 130A (or something bigger)?
The stock 3G comes in two frame sizes that originally had 90A & 130A ratings respectively, but there are companies providing upgraded units (most commonly) at 160A to 220A using the large case frame.

But keep in mind, a single V-belt drive can only support up to ~100A before the belt slips, and only then if the belt wrap and tension are sufficient. A double v-belt or serpentine belt can support up to a ~180A alternator. So if you go too large on the alternator output, you many need to improve your belt drive setup too.

How to tell if it’s a small or large-frame unit: The number of cooling holes in the front that are in the three “ribbed” sections - two holes is the large frame, and four holes is the small frame.
* Trucks that currently have V-Belts use the 8.125” mounts, and trucks that have serpentine belts use the 7” mount spacing. (* Need to verify this info). 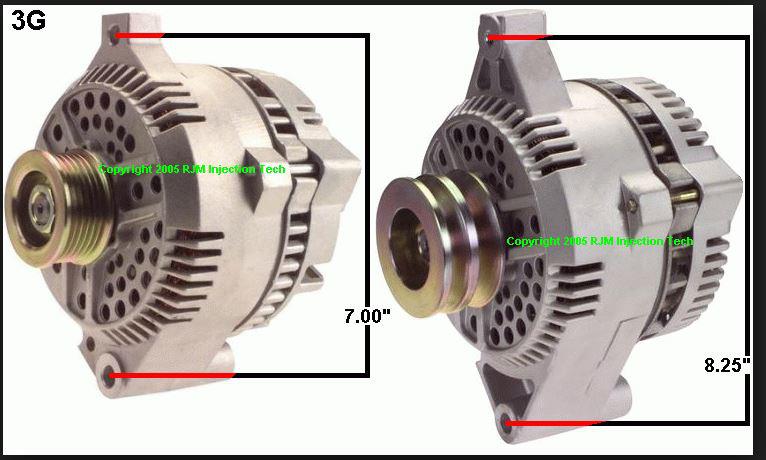 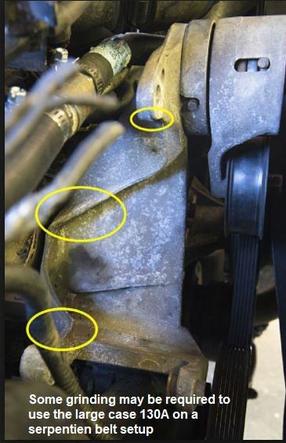 Also on a 1G to 3G swap, you may need to modify the tension-adjustment bracket for the V-Belt setups. The current bracket has a slight “offset” or jog to it. The bracket can easily be removed and “flattened” so that it fits behind the mounting ear. 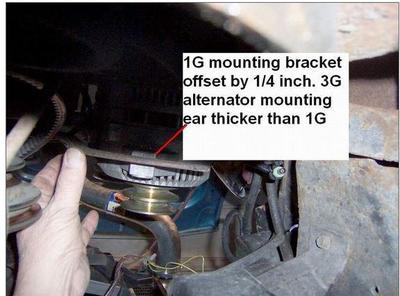 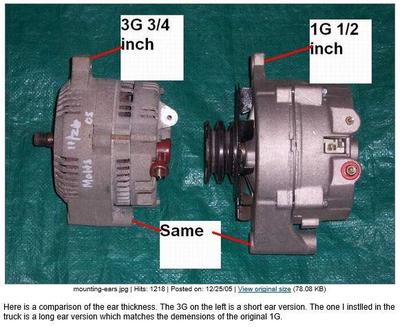 The pulleys can be swapped from 1G or 2G to a 3G. Putting a V-belt pulley on a 3G that has a serpentine belt pulley requires a small-thin shim under the pulley to keep V-pulley from rubbing on the 3G case. 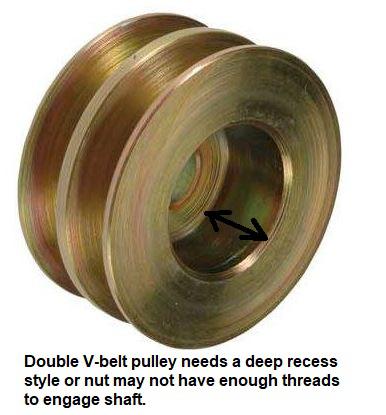 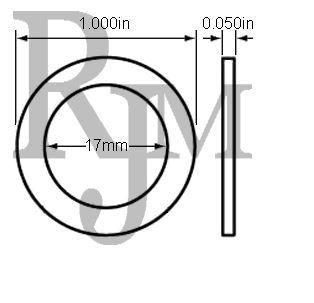 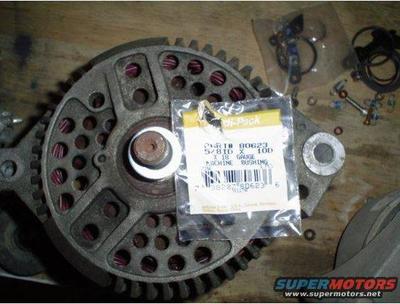 Another Consideration - LRC:
There is at least one more things to consider - the voltage regulator.  Remember that a single v-belt's limitations?  Well, even two v-belts or a serpentine belt can be made to slip and squeal under heavy loads, especially if that load is applied suddenly.  Fortunately there are voltage regulators that have Load Response Control built into them, and that really means that the regulator ramps up the alternator's output over the specified LRC time, which usually varies from 2.5 to 10 seconds.  DB Electrical sells a model called AFD0028 that has LRC built in, which you can see on the test results of Jim/ArdWrknTrk's on the page here on the DB Electrical 130A Test Results tab.

So, where do I get a 3G alternator?
There are two approaches to this - get one from a salvage or some other used source, or buy a new one.  If you are buying a used one the table below shows vehicles that would be good ones to look for, and the part number shows the alternator that should be in the vehicle.  Also, the ID/Engineering # may be shown on the alternator.
As for buying a new one, that might be a very good option since you not only usually get a warranty, but you might be able to specify exactly what the alternator is.  For instance, DB Electrical currently (2/8/2019) sells the F4PZ 10346-B from the list above for from $78 for a 130 amp unit up to $278 for a 220 amp unit - with a 1-year warranty.
Here is some info from the Quick Start Alternators page on the desirable alternators for a 3G swap:
But, if you didn’t get the wiring with the alternator, you can buy it. There are several companies making/selling it, including:
Ok, let's summarize the wiring.  There are only four wires, not including the ground, as shown in the page below from Ford's 1996 EVTM: And when you are done it will look like the diagram below.  However, if your truck has an ammeter, make sure you read and heed the information on the Ammeter & Voltmeter tab, above. 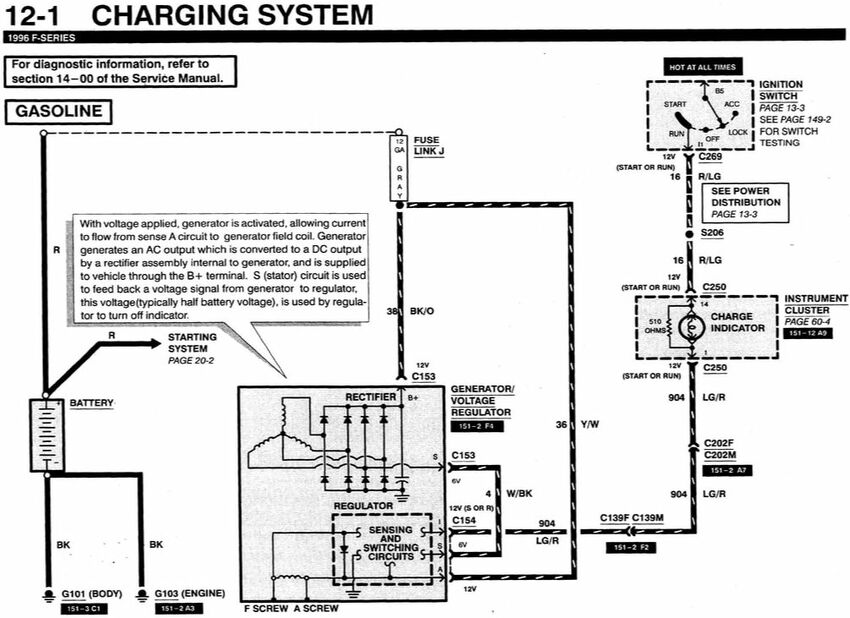 Circuit Protection:
As said, some form of circuit protection is absolutely necessary, and that could be a fuse link, circuit breaker, or a fuse.  As shown above, on the '96 trucks Ford used a fuse link, but on other vehicles they used a fuse, and when a fuse was used with the 130 amp alternators it was a 175 amp unit.  But, if you're going with a higher-output alternator then you should scale up the fuse as well.  And, if you didn't get a fuse holder with your harness you can buy a separate one, or even a circuit breaker, with examples shown below.
Grounds:
In the picture of the alternator above note that the ground connection, which is tapped 8-1.25mm, was not powder coated.  Nor were the threads in the ear at the top.   That's because current from the alternator also has to return, and without a solid return path the alternator cannot work properly.

Given that, none of the surfaces that will be part of the mechanical attachment of the alternator, and therefore the ground path, should be painted or coated - or they should be cleaned down to shiny metal if they are.  But, another option is to add a ground wire, the same size as the charge cable itself, from the case of the alternator to the engine block .

As you can see in the picture below, which is the same alternator as above before being powder-coated and having 160 amp diodes installed, the regulator connector is pointing almost straight up and the B+ terminal for the charge cable is handy to the left, although in that picture it doesn't yet have the extension on it, which brings the stud to the top.   Anyway, if that orientation doesn't work for you then you can rotate (re-clock) your alternator, and Steve83's instructions for doing so are here. 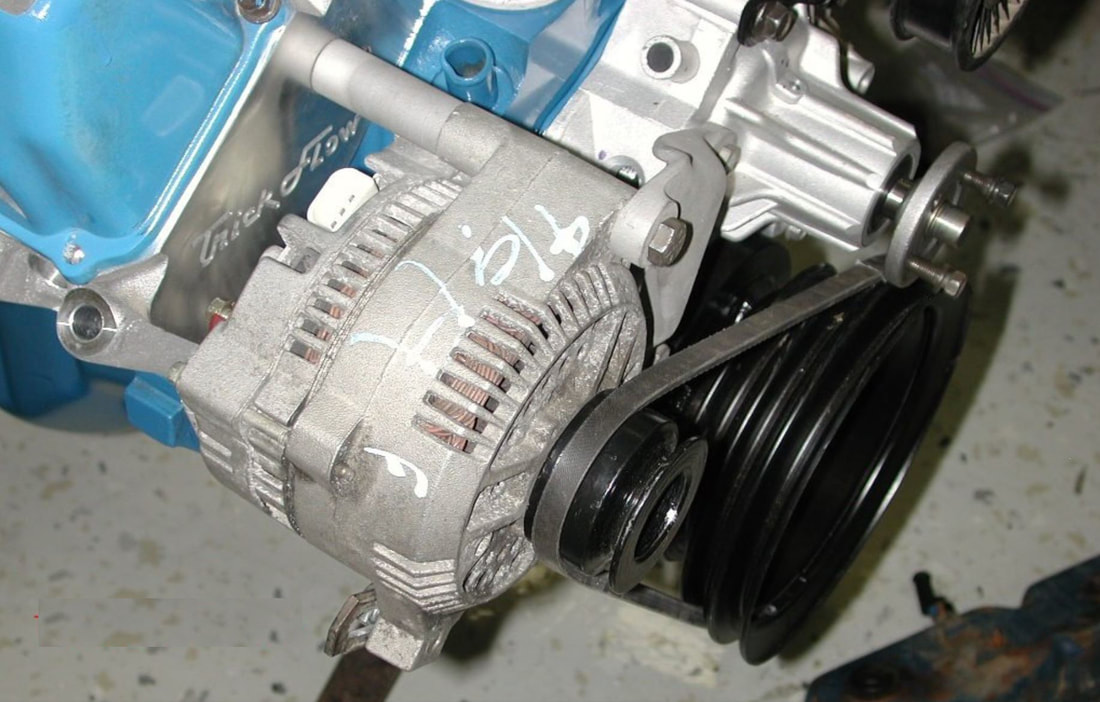 Lastly, if you have a truck with the factory ammeter in the dash, you need to think about whether or not to convert it to a voltmeter.

The problem is that the higher output of the 90A or larger alternator is too much current for the stock ammeter's shunt, shown in the schematic below, which is probably only good for 70A since that's the size of the largest alternator that was available in these trucks.  That's why you must move the alternator's output to the battery or starter relay/solenoid's hot terminal, as shown below, or you are highly likely to melt the shunt, and probably melt it into other wires in doing so.

But by moving the alternator's output the ammeter will no longer be "seeing" the current flowing into the battery.  In fact, what it will be "seeing" is the load of the electrical system, such as the ignition, lights, heater or A/C fan, etc.  So, all you will see on the ammeter is discharge, even when the alternator is keeping up with the demand.  (Saying it another way, with nothing on in the truck the ammeter will sit in the center, but when you start bringing accessories on it'll swing to the discharge side - whether or not the alternator is working.)

An alternative is to convert the factory ammeter to a voltmeter. Or you can install an aftermarket voltmeter.  RCCInnovations will convert your factory ammeter into a voltmeter for $40. It will still have “D” and “C” and not the actual voltage readings, but it will show you if your alternator is charging and the state of your battery.

However, you will need to re-wire in order to use it.  And, you need to put a relay in the circuit somewhere as the voltmeter pulls ~80ma and w/o the relay, which should be pulled in by a key-on voltage, the voltmeter will be "on" 24x7, which will eventually drain the battery.

The schematic below shows one way to do that, but there are a myriad of others.  In this method the original red/orange wire that was used for the ammeter is used to supply the positive voltage to the voltmeter - without any change.  But the yellow/light green wire that fed the negative side of the ammeter is cut in the wiring harness in the dash and a relay is added.  The relay is brought in with key-on power, and when it closes it supplies a ground to the voltmeter's negative terminal, thereby activating the voltmeter. 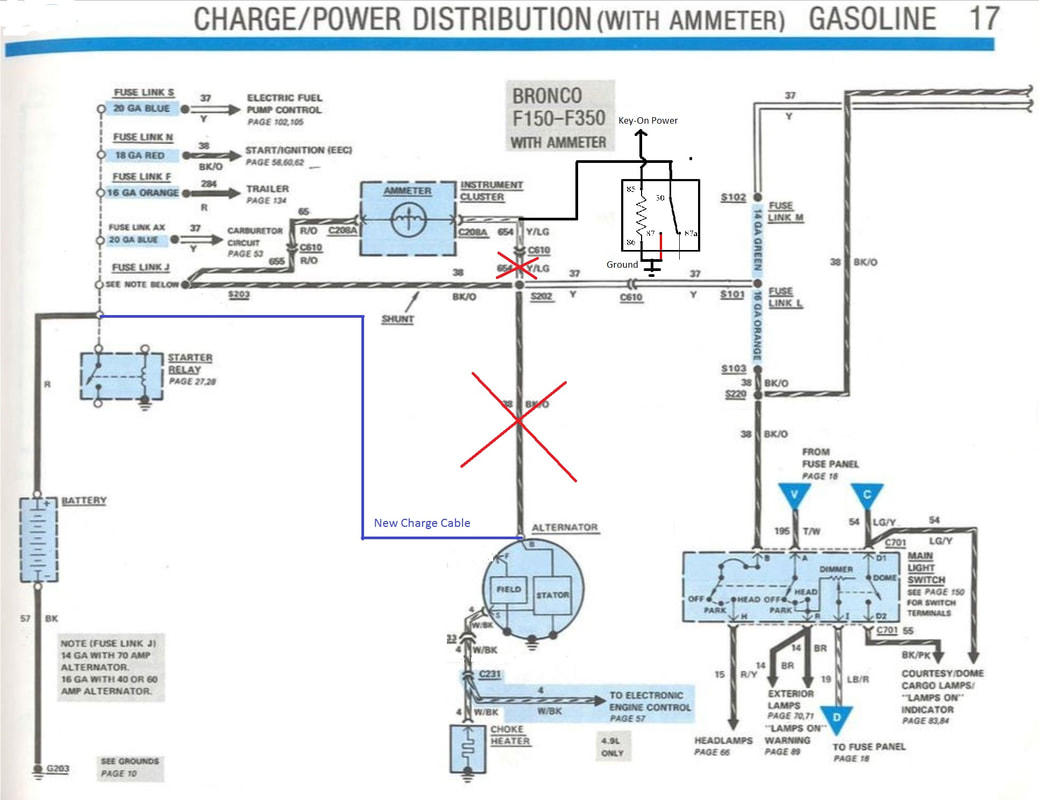 But, if you have a 12 volt choke, like on an Edelbrock carb, then you may want to change things.  I say that because it is possible to run a 12v choke on the stator's output, but it takes longer for the choke heater to get warm enough to cause the choke to fully open.  And that means you may have to run the choke leaner than you want in order for it to come off fully on short trips.