MUCH OF THIS HAS BEEN TAKEN FROM THE THREAD ENTITLED, ODDLY ENOUGH, DAD'S AIR CLEANER.  BUT, THAT THREAD IS CURRENTLY 7 PAGES LONG AND CONTAINS OVER 100 POSTS, SO I'LL TRY TO CONSOLIDATE IT A BIT HERE.
Most folks will top a "built" engine with an open-element air cleaner.  And, while I admit they look cool, they are anything but cool - except in the winter when they are overly cool.  But, the rest of the time they are HOT, meaning they feed unduly hot air into the engine.  (See the Air Cleaners page for more on this.)  Given that, I'll go with a stock-style air cleaner for Dad's truck.  Not truly stock, but one that looks like it is stock to all but the well-informed. 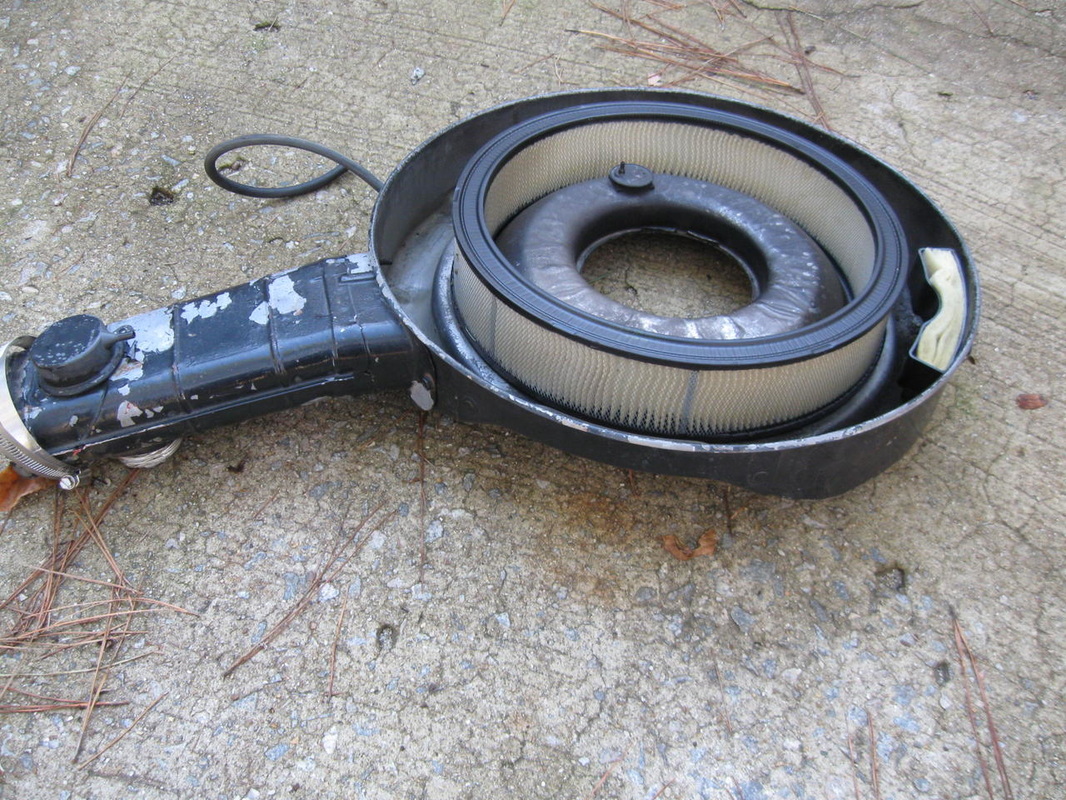 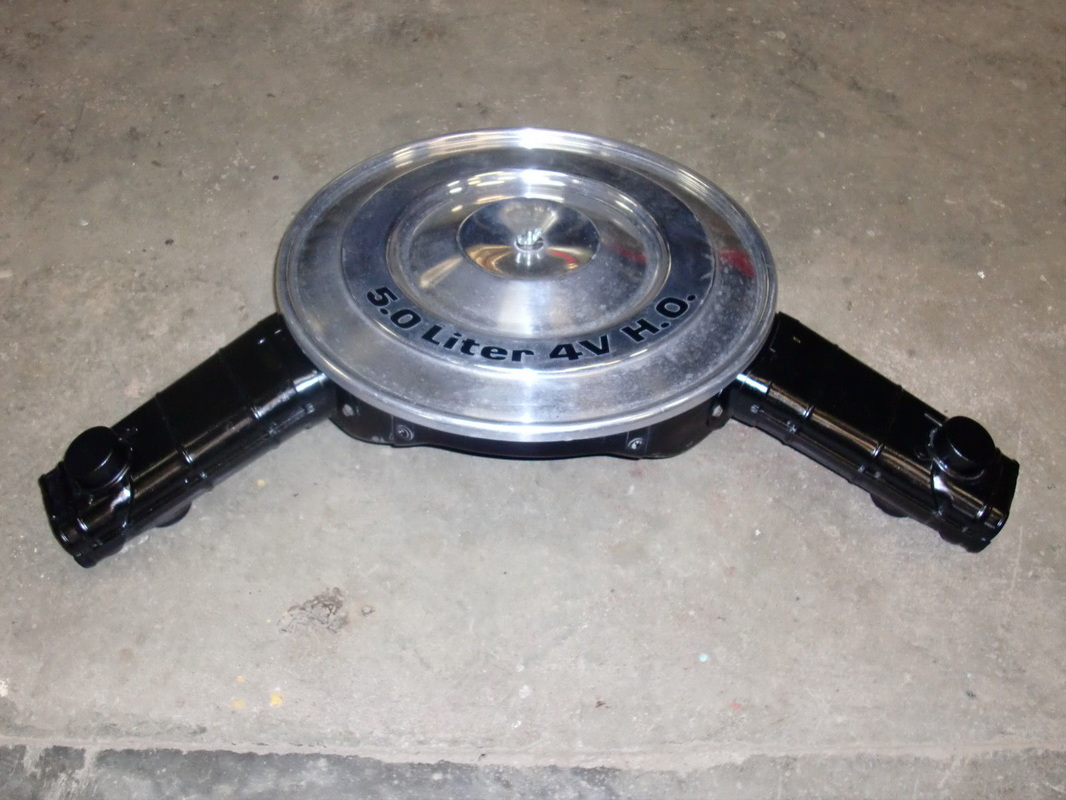 Unfortunately the Mustang air cleaner's snorkels have too much "droop" to clear the tall valve covers I'm using - which are needed to clear the Scorpion roller rockers.  So, I'll be using an HO cleaner from a truck - one my friend Brandon gave me.  However, I want a dual-snorkel unit, so started looking at what snorkels can be used.  As it turns out there are at least two different snorkels used on the V8 air cleaners - one on the 2bbl engines and one for the 4bbl engines.  They are the same length and bolt on with the same, but have different "offset", meaning the angle they come off the air cleaner, and different "droop". 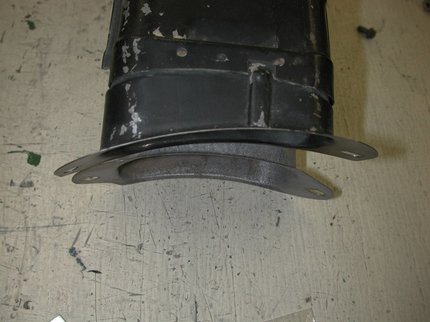 Here's a picture that shows the different offsets, and you can see that the black HO snorkel sweeps back at more of an angle than the silver standard snorkel.  The angle of the HO snorkel works well on the passenger's side of the engine where it is typically used.  However, if it were used on the driver's side it would cause the snorkel to angle forward so much that it would hit the air conditioning compressor.

On the other hand, the standard snorkel doesn't have an offset, so using one of those on the driver's side would put the end of the snorkel further rearward.  However, even then it doesn't look like it would clear the air conditioning compressor. 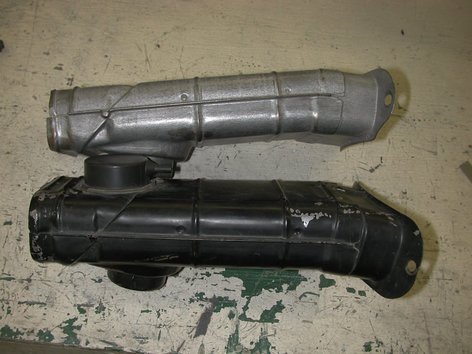 This shows the different droop of the snorkels, with the black HO unit having 3/4" more droop at the tip.  That would be handy to clear the valve covers, but the offset doesn't look like it would work. 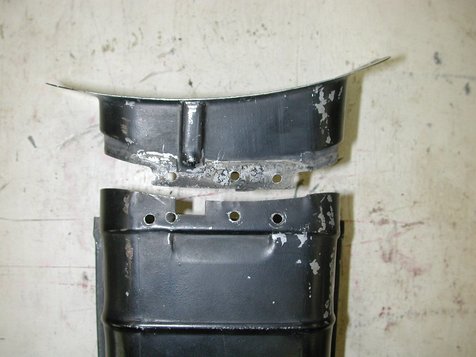 So, what is needed is a snorkel with exactly the opposite offset from the HO and the droop of the standard unit.  How 'bout using an HO adapter, the part that adapts the snorkel to the air cleaner base, but turn it over? And, maybe fudge the angle a bit to decrease the droop?  Here I've drilled out the spot welds. 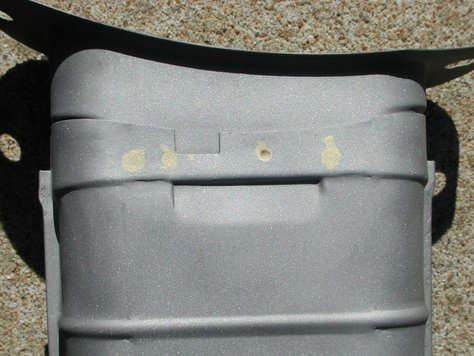 And, here's the adapter reversed and brazed onto the snorkel with a bit less droop - although I haven't measured the difference to see how much improvement it made.  Anyway, note that the angle is backward from that in the picture above, so the snorkel will sweep back rather than forward on the driver's side. 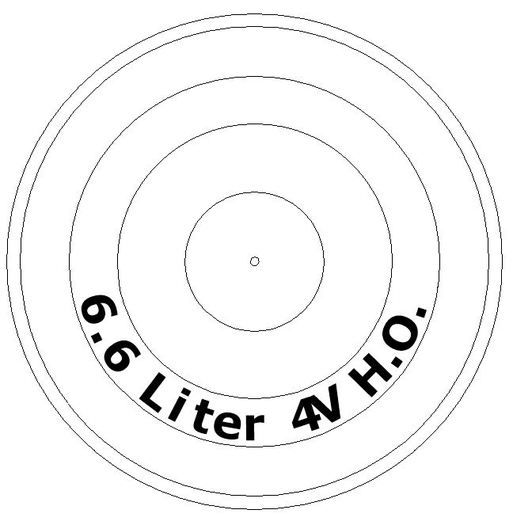 Ok, with the droop and offset issues seemingly solved, although we won't know until the engine is in the truck and the accessories on, it is time to think about the other details. One of those is the lettering on the lid. Remember, I want this to look stock to all but a very few well-informed Ford gurus. And, since the original HO air cleaner said "5.8L 4V H.O.", I'm thinking I'll create a vinyl decal like this, although I'll use the same font Ford used. After I polish the aluminum lid I'll affix the decal and then put a coat of clear powder over it to ensure it stays. And, I'll powder coat the base and snorkels black like the original HO air cleaner. So, save for the "6.6" and the extra snorkel, and a bit of extra plumbing, it'll be a stock HO air cleaner. How many people will catch that? 😈 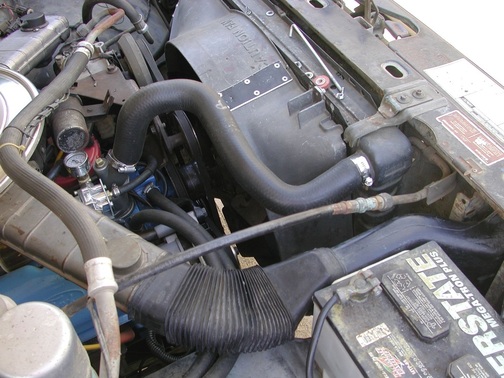 Next, how does a twin-snorkel air cleaner connect to cold air?  Here's the stock connection to the radiator support on the passenger's side: 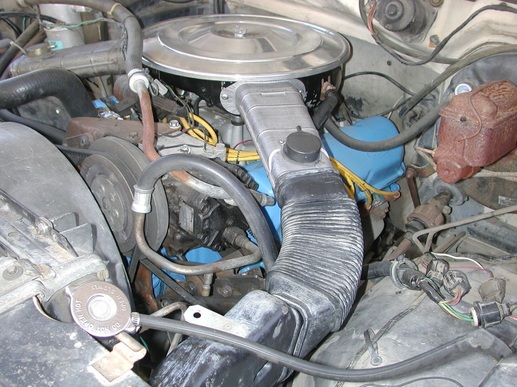 And, here's how it connects to cold air on the driver's side.  Note that it uses the same components as on the passenger's side, but just turned upside down.  And, those would be E0TE-9C675-AB or E0TE-9C675-BB adapter, meaning the piece that connects to the radiator support, and the E0TE-9A624-BA flex tube.

But, what about the heated air for cold weather conditions?  The passenger's side snorkel will connect to the stove that surrounds the exhaust manifold with the standard flex tube, but the snorkel on the driver's side will have no opening for hot air.  Both snorkels will have their vacuum motors controlled by the standard ACTS, so when hot air is called for all of the incoming air will be from the passenger's side.  Then when cold air is called for the flappers will open fully and both snorkels will pull cold air from the radiator support.

Where does all of this stand?  I can't finish it until the engine is in the truck and the accessories are installed.  Then I'll be able to test-fit it to see what angles are needed on the snorkels.  Then I can line up the adapters and the snorkels, figure out exactly where the hole needs to be cut on the driver's side, and make it happen.  But, all of the bits and pieces are available, so it will work.