How to replace the cowl seal, cheaply, on Bullnose trucks.
The cowl seal, sometimes known as cowl lacing, which is shown as 02824 in the illustration above, is a critical item for these trucks.  Without it water will pour into the engine compartment and probably pool on top of the air cleaner.  If you have a factory air cleaner, most of which have a depression in the center, it will probably go past the wing nut and go down the carburetor into the engine.  And even if it doesn't do that it can easily cause rust or corrosion on many of the part in the engine compartment.

The part number for the factory part is E5TZ 1502824-A, but most of the NOS ones are gone and even if you can find them they may be hard by now since they are at least 30 years old.  However, the aftermarket has come up with replacements, such as 36002A from Bronco Graveyard for $35.  However, for $15 you can make a very effective one and have enough material left over to do another truck for free.  (Some may claim that the price will be higher because the garage seal needs an adhesive, which adds to the cost.  However, the factory or aftermarket parts aren't going to seal completely either so probably should have a similar sealer if you want the water to stay out of your engine compartment.)

The stuff to use is garage door "seal" or "bottom".  Here are two pictures of what appears to be the same stuff from the same vendor, but with slightly different labels: 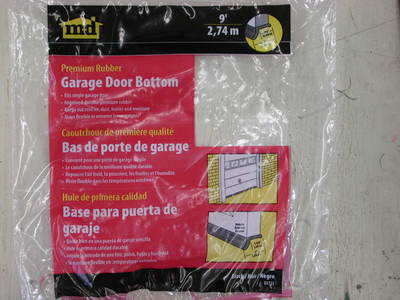 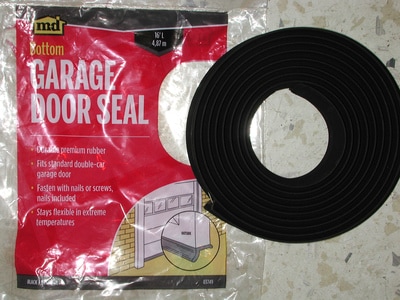 And here are a couple of pictures of cowl seals I've done.  On the left is Big Blue's new cowl seal.  In this case I used the Garage Door Seal, which came with plastic washer/nail combinations.  I pulled the nails out and ran the screws from the original cowl seal through the washers, as shown below.  And, note how the air cleaner is rusty and the intake manifold is corroded.  That's because the old seal leaked badly and the rain poured onto the engine.

On the right is Rusty's cowl seal.  Note how the lip on it is bent down, as opposed to Big Blue's that is kind of wavy due to the screws.  Rusty's seal was wavy as well when first installed, but it has evened out over time - and it doesn't leak.  But, it did leak initially, and that was because I didn't seal it well to the cowl and the water ran behind it and onto the engine.  I then ran a bead of pourable RTV along the top edge of the seal and it ran into the cracks and crevices and sealed it.  So, when I installed the seal on Big Blue I put a bead of Permatex's Ultra Black RTV on the cowl before installing the seal.  However, that didn't work well at all as the RTV didn't adhere to the seal.  Not at all!  So, since it had been suggested that a black urethane roofing sealant would be the best as it adheres much better than RTV, I bought Black Jack Neoprene Super Flash Cement #99.  That seems to have done the trick as the seal is well and truly stuck and water poured on the seal just runs off the ends. 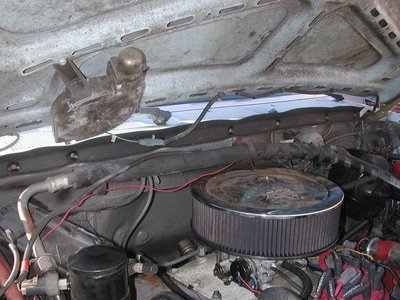 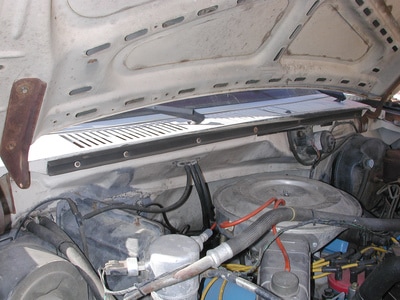 Now, you might be asking how that lip on the seal works with the hood.  Here are a couple of pictures of the seal I put on Dad's truck.  In the one on the left you can see that the seal is going to hit the lip of the hood as it comes down.  And in the picture on the right, taken from the other side by the way, the hood is closed and the lip on the seal is firmly against it.  It doesn't leak and stays very pliable. 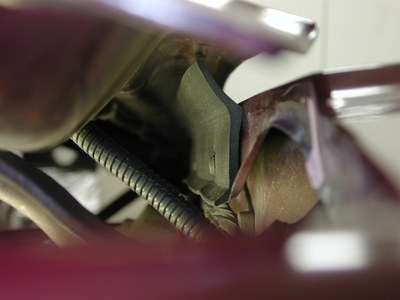 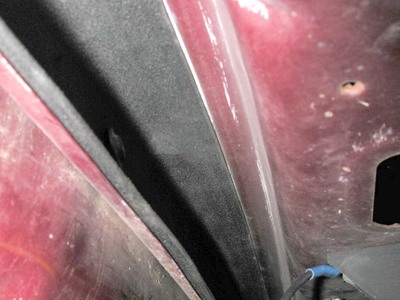