Much of the following is documented ad naseum on a thread on Ford Truck Enthusiasts called Dad's Engine.  But this page tries to summarize the plans for and building of the engine to give an overview.

The original 351M wasn't very strong.  In fact, it got about 10 MPG when I got the truck, and Dad said that was "par for the course".  But, Rusty's 351M was much stronger and got better mileage, so I knew there must be power in there somewhere.  After a lot of research, including perusing ​Bubba's site, reading George Reid's book on Ford 351 Cleveland Engines, and talking extensively with the Cleveland engine guru Tim Meyer, I came to realize that the main problem with the 351M is a lack of compression.  Unfortunately, there's not much that can be done to raise the compression on a 351M as there aren't pistons available that will give much more than 8.0:1 - if that.

However, a 400 is a whole different story.  Tim has pistons for a 400 that can give about any compression ratio you desire.  And, all it takes to make a 351M into a 400 is a crank from a 400 and the right pistons.  Yep, the rods, heads, intake, etc are all the same for a 351M as a 400.  Given that, I watched Craigslist and eventually found a guy selling a 400 for $40.  It was complete save for the intake and carb, but I don't need another cast iron 2bbl intake nor Motorcraft 2150 carb. I loaded up the shop crane in Rusty and took a trip to Bristow.  Here 'tis: 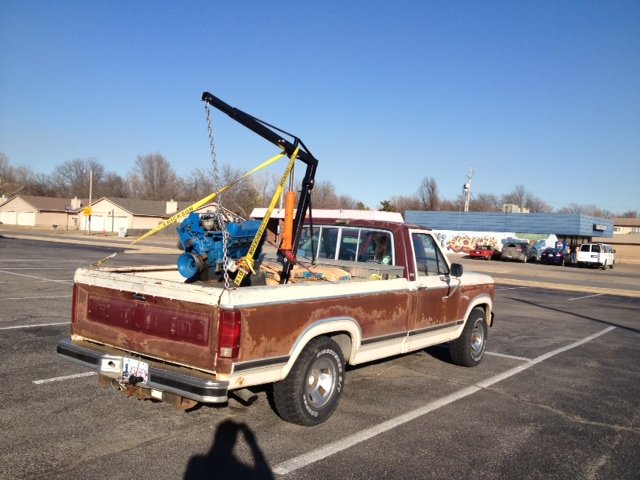 Once I got it torn down it truly was a 400, and the crank was in good shape. Given that I called Tim Meyer and we talked about my goals of having a stump-puller, with very strong low-end torque, reasonable gas mileage, and run on pump gas. We kicked around several ideas, but finally settled on:Tim assured me it would crank out about 500 ft-lbs!

While the parts were being gathered (the pistons come from Keith Black and weren't in stock) I started thinking about the rods. The first thing I did was to grind the casting/parting lines off of them and round the hard corners. Then I cast about for someone to shot peen the rods as that greatly strengthens them. I finally found an outfit by the Tulsa airport that normally shot peens aircraft parts for American Airlines and others, but agreed to do the rods. When I picked them up the guy told me that a lot of other things will fail before those rods let go.

When the parts came in I took the bulk of it as well as the block, rods, and crank down to Stanley Morton with instructions to:
That took a while, but I wasn't in a hurry. When I got it back I then made Tim's mod's to the oiling system as well as some of my own, such as blending the oil passages in the block as well as the oil filter adapter.  And then it sat for over a year.  Finally I decided to send it to Tim Meyer and have his guy, Cory, build it.  I'm really glad that I did because he found two issues with Stanley's work:Cory took care of those issues and assembled the engine, mounted it on the dyno, and tuned it.  On October 12th, 2014, I went to Tim's shop and not only saw the engine but watched it undergo 4 dyno pulls.  Here's a video of some of them:
​
And, here are the results in both tabular and graph formats: