The ground wires used on the 1980 - 86 Ford trucks.
There are several ground wires originally used on the 1980 - 86 Ford trucks and, in my estimation, they are the absolute minimum that is workable.  The EVTM's that are included on this web site show the grounds and provide a very good resource.  Here are links to those:But, even that information is hard to use as you have to chase down where many of those grounds are and what they do.  So, I've prepared this summary of the grounds shown in the two EVTMs:

And, not much is said about the various ground wires that were used, so I'm attempting to document them here.  Here's the only diagrams I find in the EVTM for them, with the green being my addition:.  Note that the only combined engine/frame ground cable is shown for the diesels.  Also, note that the engine/firewall ground is said to go to the "frame" in the illustration.  However, in the list of grounds it is said to go to the "left hand side of the dash panel", which means the firewall.  And, in the illustration on the following page for this ground wire you'll see that another illustration in the EVTM shows it going to what we call the firewall.  So, the "frame" is a mis-print. 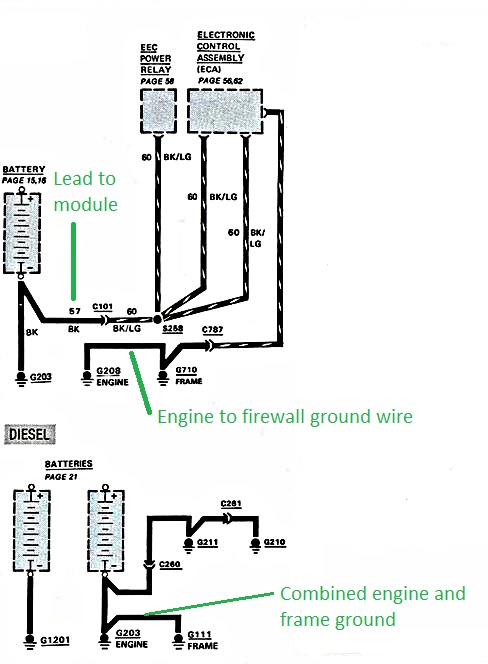 ​And, here are links to additional pages about the ground wires/cables that I've found: