The story of the resurrection of a 1981 F150.
Rusty's "journey" has been chronicled in a thread on Ford Truck Enthusiasts.  But, that thread is currently at 57 pages and growing, so I offer this somewhat abridged version here.

I think I bought Rusty in October of 2011.  The guy said the engine had been rebuilt and it ran really strong, but the clutch was out of it.  So, I bought it and had AAA bring it home - and discovered that the clutch was fine but the rear differential was blown up.  And, once that was fixed I found the next layer of the onion, and the one after that, and the one after that.  But, in the end Rusty has become a member of the family and a very reliable truck.  In the picture above, from October 1st of 2013, he's hooked up to a trailer to go get Dad's truck from the paint/body man that didn't finish the job.  Then, in October of 2014 he pulled the same trailer on a 200 mile round trip to pull a '50 Chevy pickup from a field.  And in February of 2015 he made another 200 mile trip to tow our new-to-us 25' SeaRay boat home from Oklahoma City.  So, he's quite capable as a tow vehicle and a very dependable daily-driver.

But, that wasn't the case initially.  Once I got Rusty home I proceeded to pull the transfer case (NP208) and then tranny (NP435) to get to the clutch.  However, about the time I got the tranny out I glanced at the clutch and it had plenty of material.  I started working my way back down the driveline until I got to the rearend - and it was "blown up" in the words of my friend James that rebuilt it.

A few hundred dollars later I had the differential back and installed and got to drive Rusty.  Yuk!  Yes, the engine had lots of go when you nailed it, but it wouldn't idle worth a darn.  And it was slobbering-rich at low RPM.  So I pulled the Holley and installed an Edelbrock 1406.  Problem solved.  It now ran much better at low RPM and idled great.  However, it probably didn't have as much go at WOT, but it had plenty.

Then I realized the front drive shaft was in the toolbox with a bad u-joint.  In the process of replacing u-joints I found that the slip-joint splines were pretty well gone: 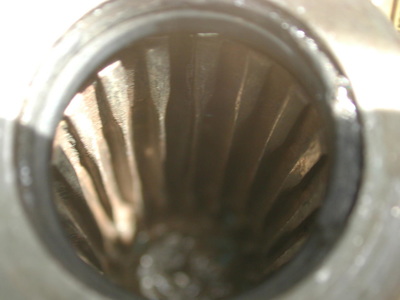 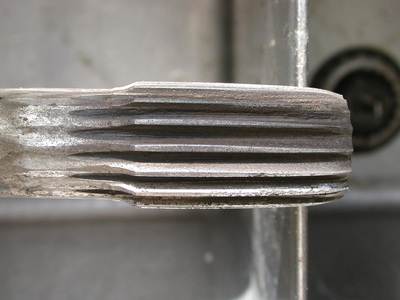 So, to James the shaft went and it was repaired.  Then, when I got it back I realized that there was a vibration when coasting down a long hill in 2Hi.  Sure enough, the rear shaft was worn the same way, so it went to James.  In the end the two new shafts went to Dad's truck and Dad's shafts came to Rusty - which is where he got the red-headed stepchild name.

And then the brakes started grabbing.  After a royal battle I finally got the LR brake drum off, and here's the crud that came out of it: 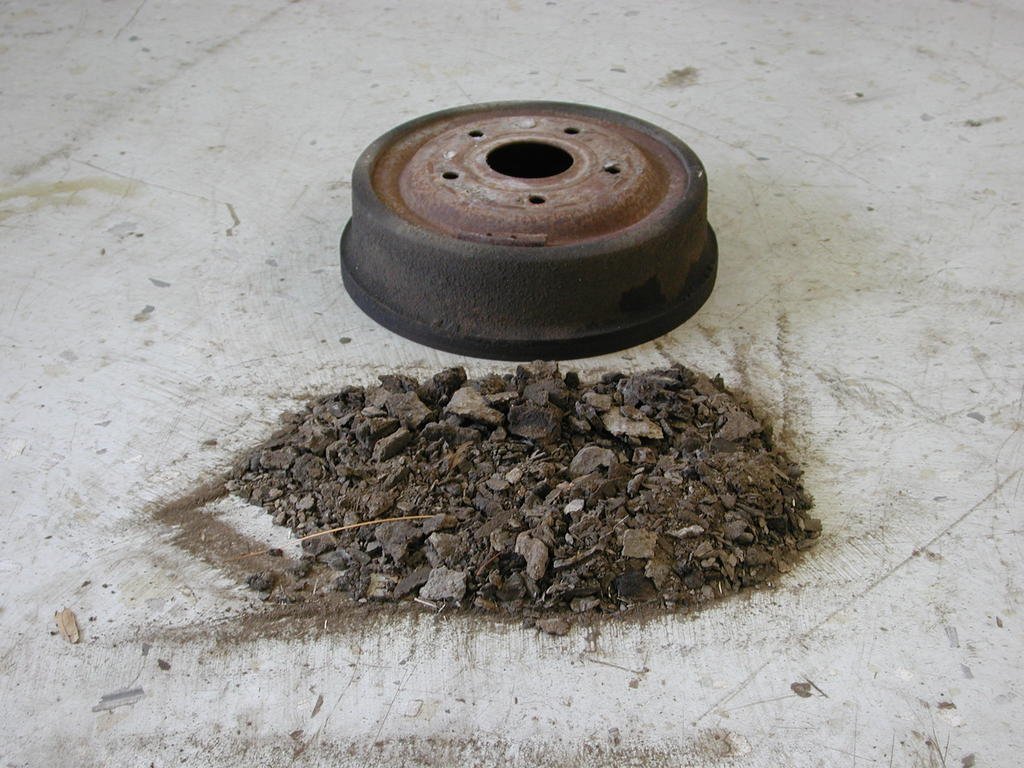 After new wheel cylinders and some used shoes that were laying around, Rusty was stopping pretty well.  But then I realized that there was a significant oil leak.  At first I thought it was the oil pressure sending unit at the back of the block, but after several attempts to seal it, including replacing it, I realized it was coming from the back of the engine.  Fearing that I had a gallery plug leaking I pulled the engine: 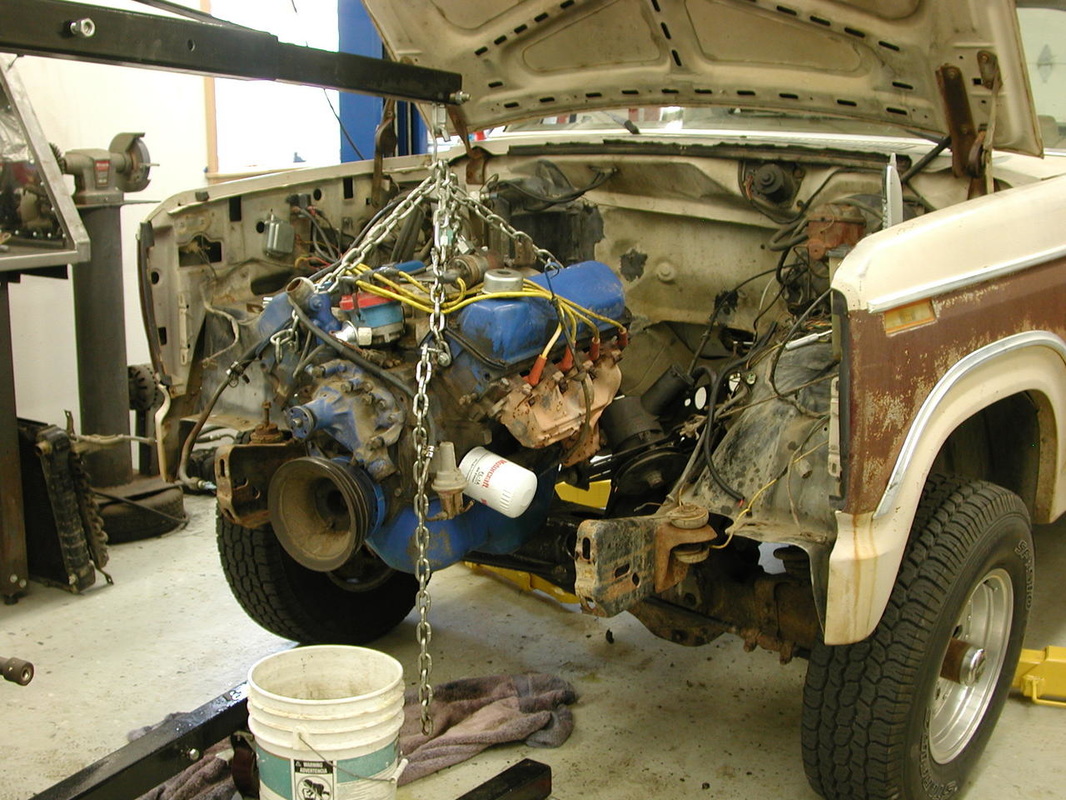 And, lo and behold there was a rather sizable hole below the intake manifold right into the lifter area: 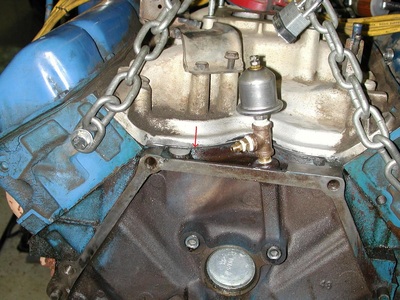 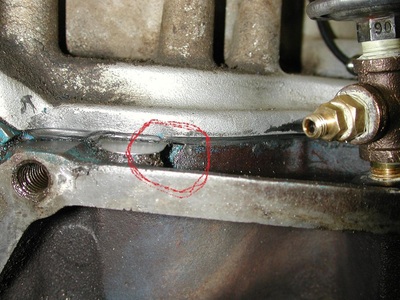 Ok, time to pull the intake manifold to fix the leak.  But, I also had a slow coolant leak, so I decided to tear the engine down to figure out what was going on, although I left the pistons in to ensure the rings would still be seated.  And in that tear-down I learned that there had been a problem with an exhaust manifold bolt and the head needed to be helicoiled.  But, whomever did it drilled into the water passage of the head, so the exhaust manifold bolt was leaking around the threads.  However, I remembered that the Chrysler B & RB engines had "wet" exhaust manifold bolts and had to have a sealer on them, so that problem was easily solved.  And, a check of the bottom end verified that the engine's rebuild hadn't been too long ago as the clearances were in good shape.  So, I put it back together, painted it, and re-installed the engine in the truck: 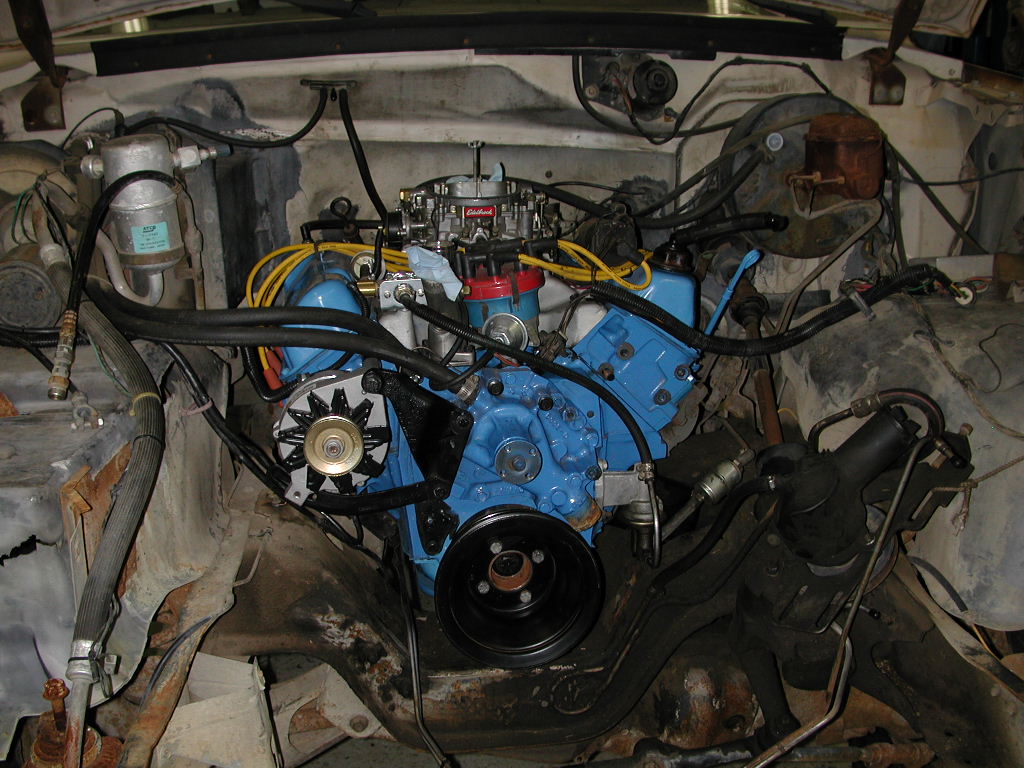 Expecting that I was going to tow with Rusty, and because I was installing the C6 from Dad's truck, I installed the largest tranny cooler I had on the shelf.   The one on the right is the one that went in - I was just checking things out for fitment here. 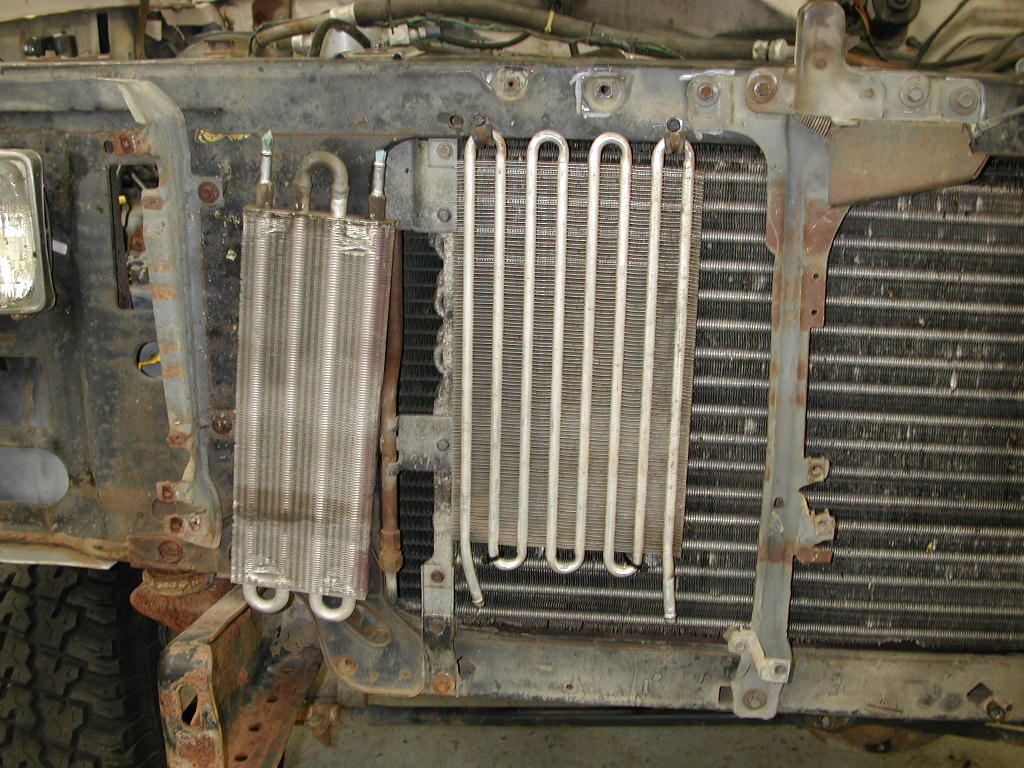 But, if you are converting from an manual tranny to an auto you also have to do something about the hole in the floor.  Well, it turns out that Rusty was originally a 2wd automatic truck and someone converted him.  But, when they needed to get the shift levers through the floor they used a cutting torch: 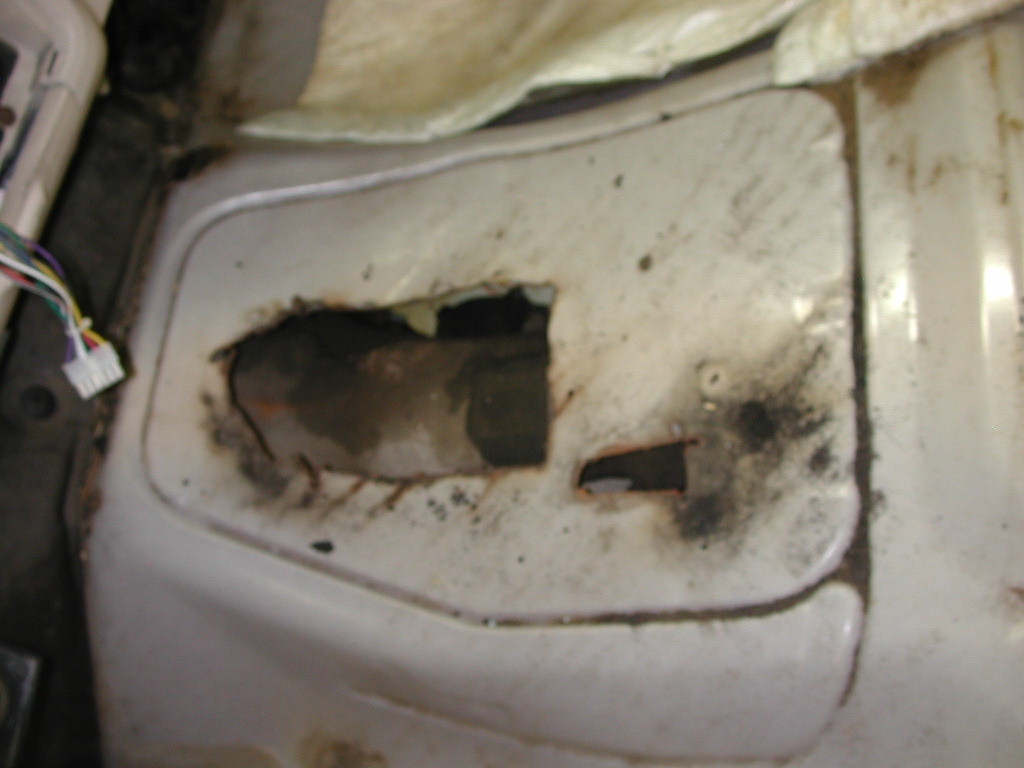 I don't like shade-tree approaches like that, so cut out the floor and used the proper tranny cover.  In this case I took the one from Dad's truck as it was getting a ZF5 tranny and that requires a taller cover.  In fact, the cover on the right is the one going into Dad's truck. 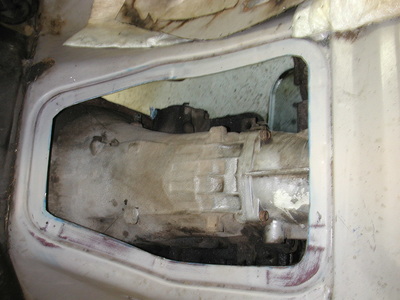 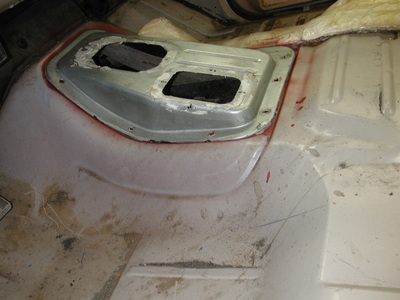 As things were going back together I realized that the fan shroud on Rusty was better than the one on Dad's truck - so I swapped.  But, Dad's shroud had problems with the plastic ears that hold it on - they were broken.  So I made ears out of strap and bolted them on.  They work well.  And, by the way, the patch on the shroud is some of my father's work.  He could repair anything, and this fix has lasted many years and miles. 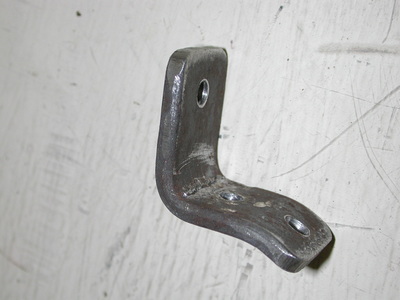 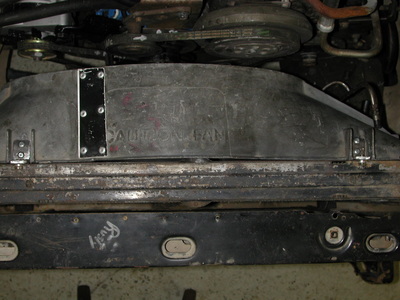 While working on the brakes I realized that the rear axle vent was missing.  So, I replaced it.  But, notice the crud that was on the axle. 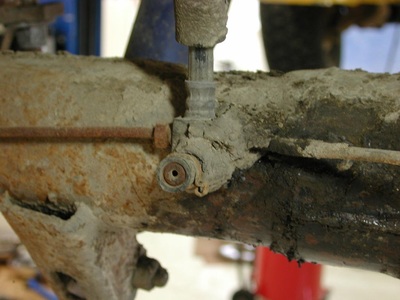 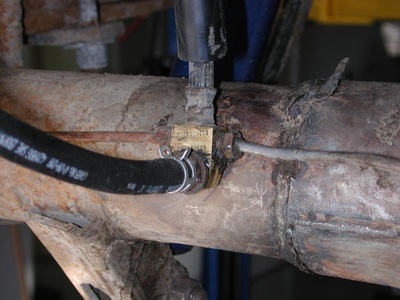 Crud was everywhere underneath.  In fact, it was so bad that the guys on FTE started calling him Crusty!  In the picture on the left you can almost make out the u-bolts for the springs.  But, after a bunch of time scraping and wire brushing I finally got most of it off - as shown on the right. 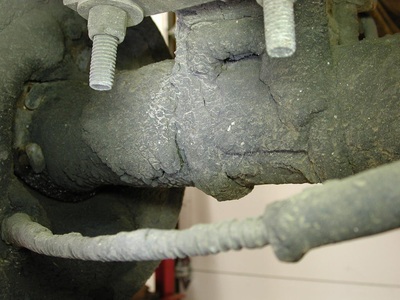 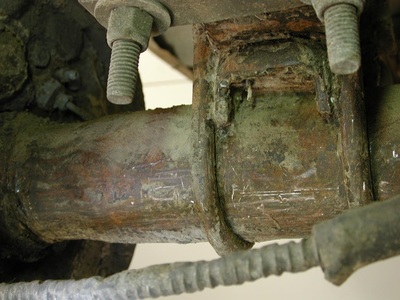 Inside it was just as bad.  On the left you can see the before picture of the plastic trim panels that go in the rear corners of the cab.  On the right they've been scuffed and sanded to remove the dried, dead plastic.  They still aren't pretty, but I can have people ride in Rusty after cleaning up those panels and many others. 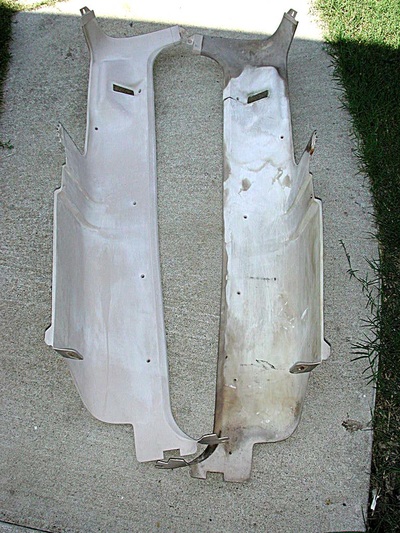 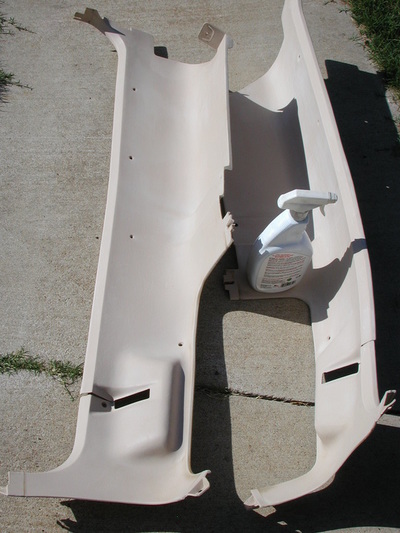 I'll have to dig up pictures of many more hand-me-down things that Rusty is sporting, including blue carpet from an '85, a seat I picked up from Jerry, a dash cover that I bought for Dad's truck, gauges I bought for Dad's truck, etc.  And, going the other way, Rusty gave up his better Mile Marker hubs for Dad's hubs.  Oh yes, Rusty is running the transfer case I had rebuilt for Dad's.  It was on Rusty when I bought him, but was also broken like many other things.  So, when I had it rebuilt James said to put it on Dad's truck as it was perfect.  I then put Dad's t-case on Rusty, but discovered that it has a small crack and it seeps ATF.  So, Rusty now has the good NP208 and Dad's truck will get a BW1356.  In addition, Rusty inherited the aluminum toolbox from Dad's truck.  Yes, he's a red-headed step child, but he's solid!