How to repair a frame crack on a Bullnose truck.
THIS OUTLINES WHAT I'VE DONE TO THE FRAME ON DAD'S TRUCK.  HOWEVER, I SHOULD POINT OUT THAT THIS PAGE IS A ​SLIGHTLY SHORTER VERSION OF THE MINI-DISCUSSION (IT DIDN'T REACH 8 PAGES) ON FTE IN THE THREAD ENTITLED DAD'S FRAME & SUSPENSION.
The 1980 - 81 trucks are unique to Ford trucks in that they have "lightening" holes in the frame. In fact, Wikipedia says "In 1979, Ford debuted a brand new, redesigned F-Series pickup truck line, with the goal of maintaining utility while getting better fuel economy than its previous generation. However, drastic measures were taken in reducing weight, including cutting large holes in the frame; this severely weakened frame rails on 1980-1981 trucks, causing them to bend or buckle under load." However, that simply is not true and, hopefully, someone who knows what they are talking about will soon edit that entry. Yes, the frames do have holes in them. And, they are not as strong as the frames without holes - but the bulk of their reduced strength is in the horizontal direction, not in the vertical direction. And, it is in the vertical direction that the load a truck carries causes stress on the frame.

During the restoration I thought about the frame for Dad's truck, and I will confess that there was a point in which I considered changing to a later frame. In fact, I had one from an '82 sitting behind the shop that would have fit perfectly. However, neither Dad's nor Rusty's frames had any cracks or bending that I could find, in spite of Rusty having been a farm truck and having been heavily overloaded frequently. Further, there's a guy on FTE that uses a Swiss Cheese frame in one of his "pulling" trucks with no problems at all. So, I opted to keep the Swiss Cheese frame for originality and its uniqueness.

Then, one day I had the frame on the lift and discovered a loose fastener between the frame and the front crossmember on the driver's side. It was an odd-looking thing, and someone said it is called a "Huck" bolt or rivet. Here are a couple of shots of it: 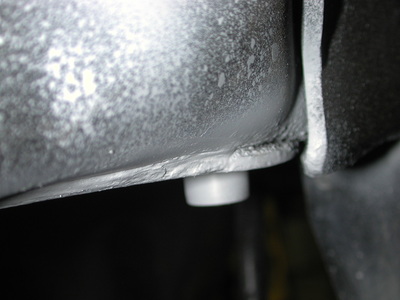 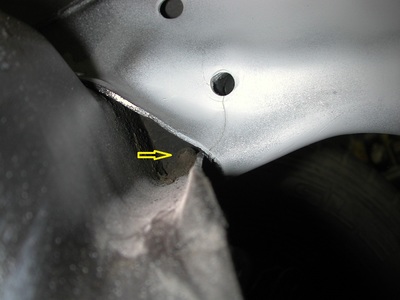 I added the yellow arrow as I was getting ready to post pictures of the loose Huck rivet, and as I was looking at the picture while adding the arrow I spotted the crack.  Back to the frame on the lift, and there it was.  (Where are the emoticons??  I need an angry face!)  In the light of the shop it wasn't obvious, but the light from the camera's flash had come from the side and created a shadow from the crack.  And, from the impression in the frame from the steering box I could see what happened - the box had very hard edges and was bolted directly to the frame.  So, when the wheel was turned the force ended at the edge of the box, creating a "stress riser".

I should note right here that the Swiss Cheese frames and the "un-holy" frames are identical in the front where the steering sector box is.  So, this crack has nothing to do with whether or not the frame has holes.  But, it has everything to do with a poor design for attaching the sector box.  In fact, it wasn't just Ford that had this problem back then.

Anyway, the question became how to repair it.  After much cussing and dis-cussing on FTE,  I decided to grind the crack out, weld it up, and reinforce it.  Here are some pictures of that process.  Note that in the middle picture you see a light piece of angle bolted to the frame and "massaged" to fit.  But, in the next picture you see a much heavier piece of angle that has been similarly "massaged", and that's what I used for the reinforcement.  Also, the extra holes in the middle of it were to give me a spot for rosette welds. 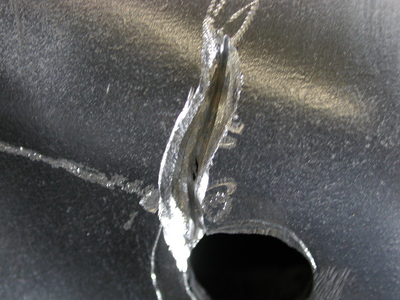 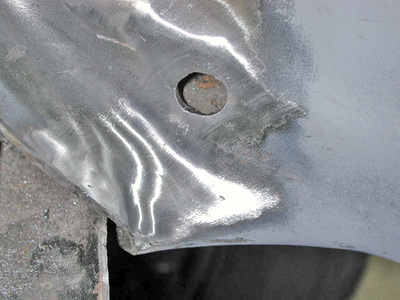 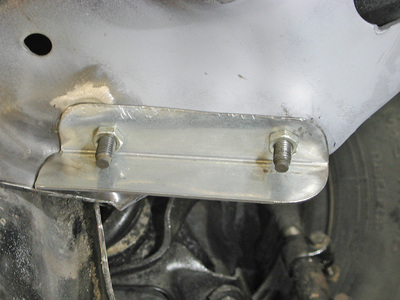 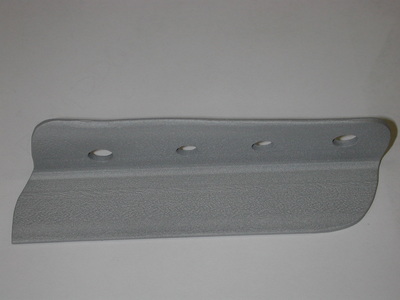 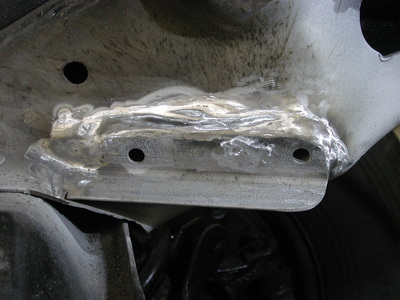 However, in the last picture above you see the Huck bolt still in place, and it being loose is what started all of this.  So, next I tackled it.  A Dremel tool with a grinding disc got the task started, and a hammer and a chisel finally got it out.  Boy, is that thing tough!  Here are a few pictures showing the process, the Grade 8 bolt, washers, and nut I used to replace it, and the process for getting them in, which included using hot-melt glue to hold the nut to a screwdriver in order to get it back in the recess. 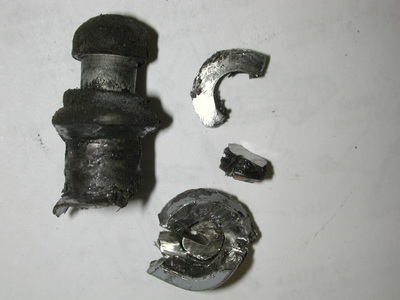 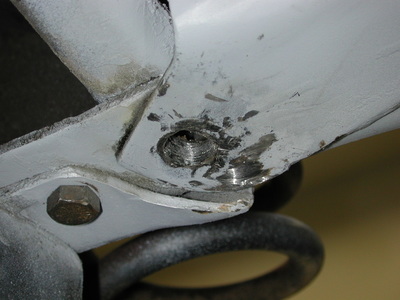 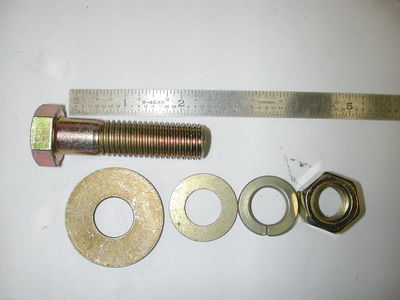 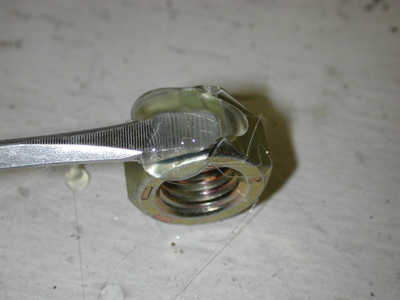 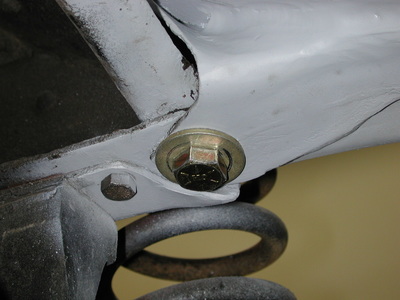 After all of the above, Dad's truck went up to John Keeline's Custom Auto Design shop.  There John had it blasted to bare metal, mounted it on the rotisserie w/o the axles, and then epoxy primed and then painted it chassis black. The rotisserie let John get into the nooks and crannies far better than he's ever been able to do before on any vehicle.  He loved it.  Anyway, it turned out quite well: 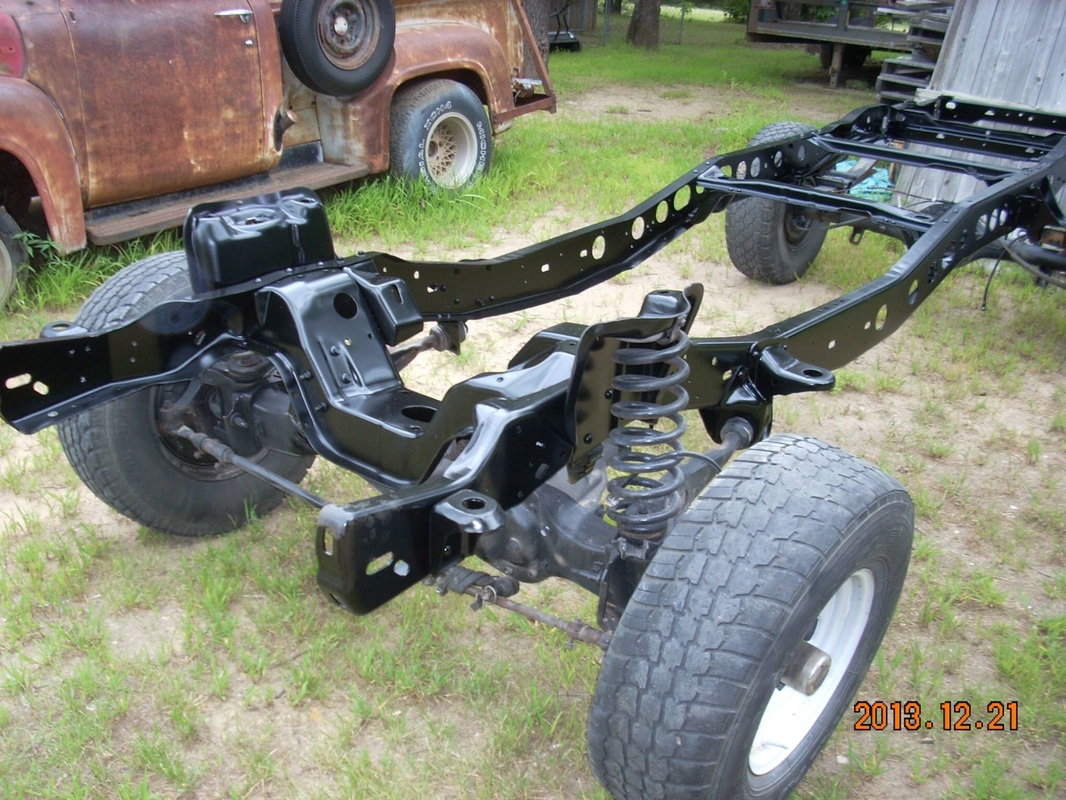 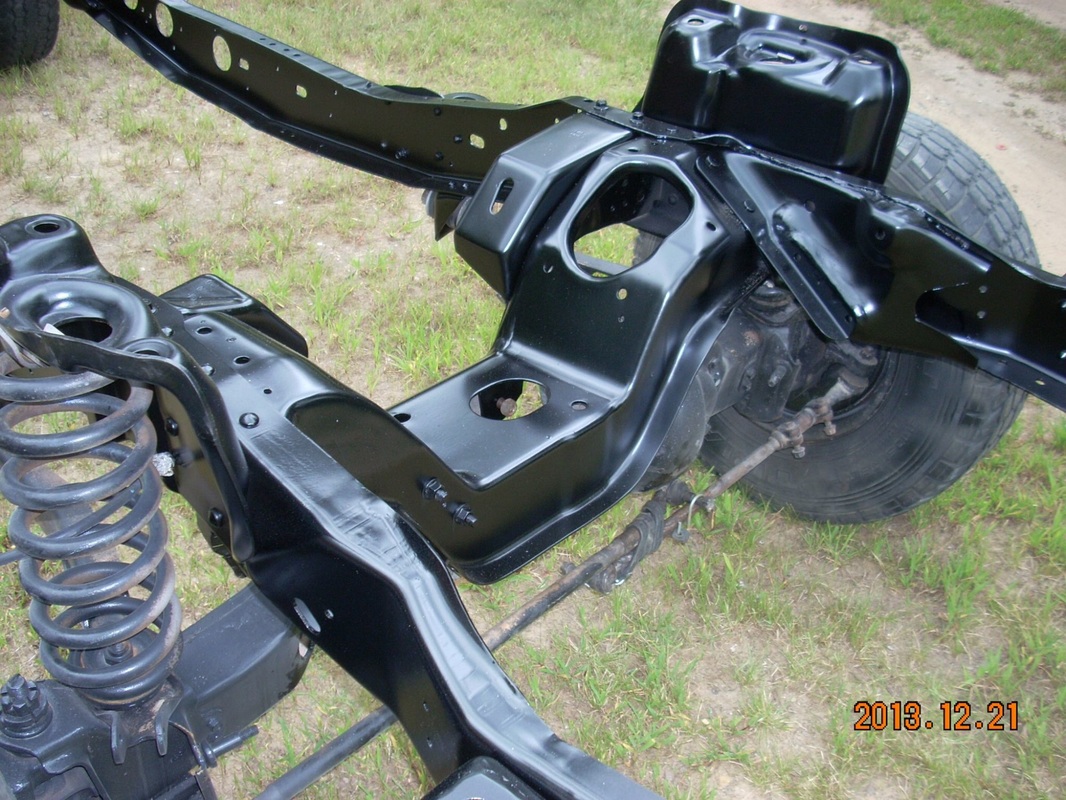 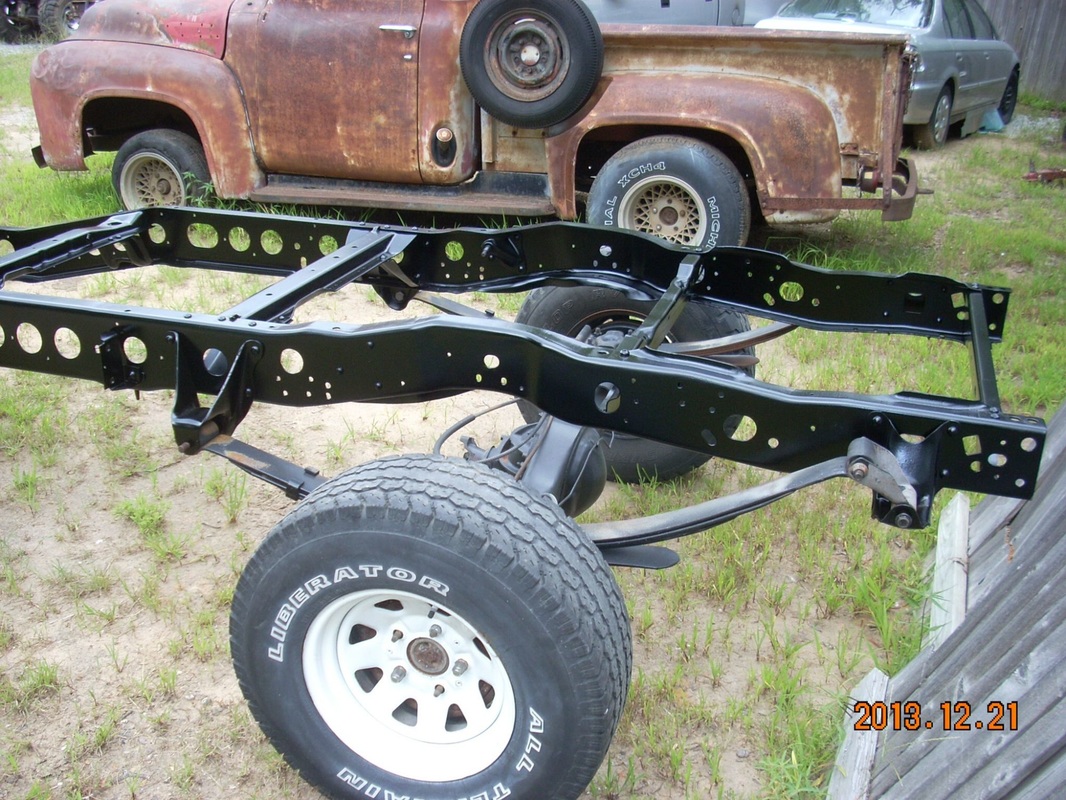